There's nothing like watching your favorite actress mesmerise you with her charm and beauty on-screen. Often, we form an image about actors based on their appearance in films. Most of the times, we wouldn't even know how they might look when they aren't facing cameras. Therefore, we decided to bring to you a list of Kannada actresses who have been snapped without makeup. Have a look at the pictures below to see how Rashmika Mandanna, Rachita Ram and other divas look naturally.

Rashmika Mandanna may be new to the industry compared to many other top actresses, but she has already been a part of several blockbusters. However, she has never feared from showcasing her real beauty to the fans. The actress often shares her no makeup pictures on social media.

Radhika Pandit is one of the prettiest actresses of Sandalwood. Radhika is now a mother, which has only made her more appealing. In the above picture, Radhika is seen sans makeup. But, she looks as beautiful as she does in her onscreen characters.

Rachita Ram has been called out many a times for 'over acting' and 'too much makeup'. But, the actress doesn't fear shedding the colors to show her real skin. Even in a recent inerview she said that she simply loves her skin and wouldn't trade it for anything!

Bhavana has given several hits in Kannada and other southern languages too. Similar to her real life, she often appears in simple roles in her movies. In the above selfie the actress has shared, she is seen in her natural skin. Isn't she simply beautiful?

Priyamani is hotness personified and you wouldn't deny it if you have watched her films. Though she presents herself in the most glamorous look before the cameras, she chooses a simple sans makeup look in real life.

Radhika Kumaraswamy might have stayed away from films for a while, but when she was actively working in films, audience eagerly waited to watch her on-screen. The throwback picture above shows that Radhika is beautiful without makeup too. 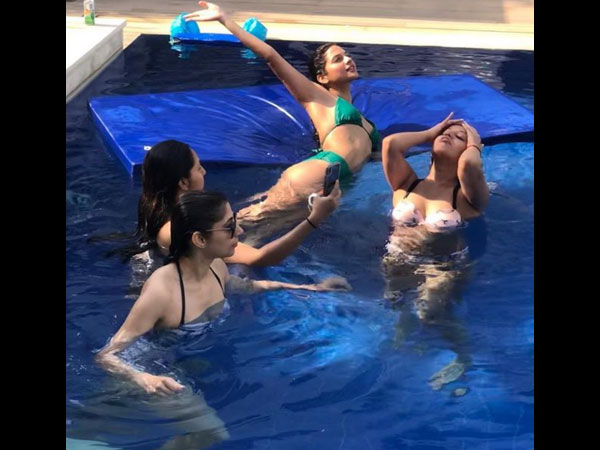