Ex-Bigg Boss contestants Chandan Shetty and Niveditha Gowda are all set to enter wedlock on February 26. The reception will be held today (February 25). The wedding functions have already begun and the couple is on the way to the venue.

Chandan looked dapper dressed in casuals - blue shirt and grey pant. He was seen posing with family and relatives. The rapper was also seen performing the pre-wedding ritual. If we go by the pictures, looks like Chandan and relatives have left for the venue.

Nivedita All Set To Leave To The Venue

On the other hand, at Niveditha's house, the pre-wedding rituals are being held. The to-be-bride looked pretty in a yellow sari. The ex-Bigg Boss contestant's relatives were seen doing ‘aarti' as they apparently, were getting ready to leave for the venue.

In Pic: Chandan Poses With Relatives

As we revealed earlier, Niveditha's house in Dattagalli is all decked-up with flowers and coconut fronds. 'Chappara shastra', haldi and mehndi functions have been completed and the reception will be held today (February 25) evening.

In Pic: Chandan With Relatives & Family

The wedding will be held on Wednesday morning, between 8.15 to 9 am, in Spectra Convention Hall which is on Hunsur Road, Mysore. Apparently, 5,000 people including Sandalwood artists, singers and VIPs are expected to attend the wedding. Power Star Puneet Rajkumar, Challenging Star Darshan and many other popular stars from the Kannada film industry are also invited to the wedding.

For the uninitiated, Niveditha Gowda and Chandan Shetty got closer during their Bigg Boss journey. But their friendship blossomed into love after they left the controversial house. The couple got engaged in October, 2019. 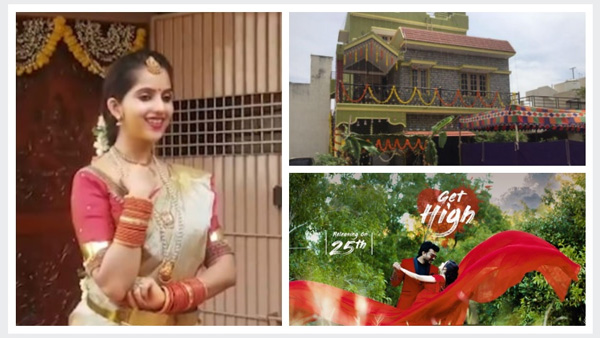