Coincidences are definitely beautiful but this one particular coincidence has totally come as a treat to all the fans of Yash and Dulquer Salmaan. The two were on their respective schedules and bumped into each other. Excited after meeting Yash, Dulquer also shared a picture and looks like even he cannot wait to see Superstar Yash’s rockstar character Rocky in KGF 2!

Dulquer Salmaan, after the coincidental meet, took to his handle and shared a picture of the two with a warm caption, “When Kurup met Rocky Bhai ! Such a fine gent. Was a real pleasure to meet you bro. Touched by your kindness and warm hospitality ! Looking forward to meeting you again on our next sched. And waiting for rockstar Rocky in KGF 2 ! #coincidence #randomencounters #best #gentlemanactor #greatconversations #actorspeak #ambitiousfilms”. (sic)

Superstar Yash is one of the most sought-after actors across the nation owing to the massive success of his most recent movie KGF chapter 1. Fans are eagerly awaiting the release of KGF chapter 2 and to see Yash back on the big screen, we are already rooting for the character which enthralled us all.

Recently, the makers of KGF 2 broke the internet as they released the first look of the movie portraying Yash in his avatar as 'Rocky' with the caption, 'Rebuilding an Empire'. With every little piece of information that appears, we all just get more and more excited for his next.

ALSO READ: KGF Chapter 2: No Release Date Until The Completion Of Shoot For Yash And Sanjay Dutt Starrer 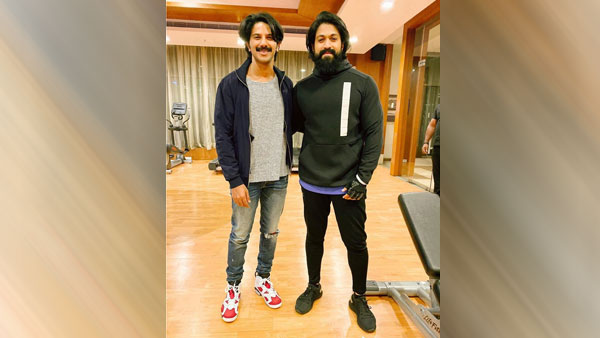