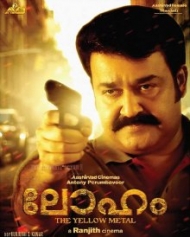 Movie showcase the life of Raju(Mohanlal) who works as taxi-driver for a kochi based cab service called "Taxi Nation". Once Raju has been assaigned to pick up Jayanthi(Andrea Jeremiah) from CIAL, who arrives from mumbai with some hidden agenda and how Raju plays a vital role in it forms the crux of the story.

Loham is produced by Antony Perumbavoor under the banner of Aashirwad Cinemas. Cinematography of the movie is handled by Kunjunni S Kumar whereas...