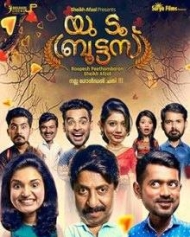 In You Too Brutus Asif Ali, Sreenivasan, Honey Rose and Rachana Naraynankutty plays the lead role. The movie is centred on seven characters and how a particular incident connects them forms the plot of the story. For the first time in malayalam films director Roopesh is experimenting six climax in one movie, each one for each characters.

You Too Brutus is produced by Sheikh Afsal under the banner of Round Up Cinema's.