Pathemari is the period drama which stars Mammootty in the central role. The movie is written and directed by National Award winner Salim Ahamed. Popular TV host-actress Jewel Mary essays the female lead. Pathemari is produced by Allens Media.

The movie revolves around the central character Pallickal Narayanan (Mammootty), who migrates to Gulf countries during teenage years, in search of a job. He belongs to a very poor family and was forced to take up the responsibilities at a young age.

He plans to leave Gulf and settle in his hometown when he comes for every vacation; but is always forced to go back. What happens in his life forms the rest of the plot... 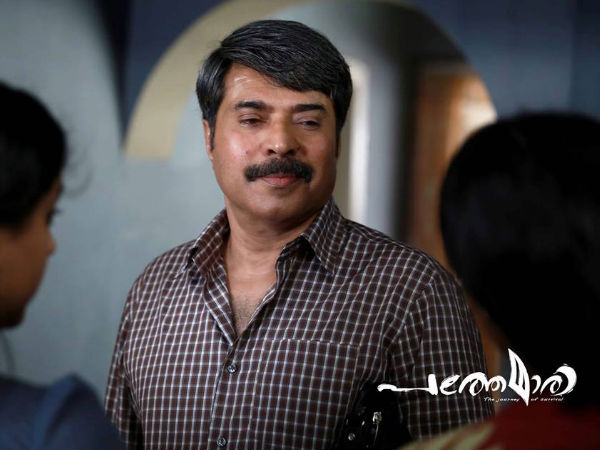 Mammootty is just brilliant as Pallickal Narayanan. Undoubtedly, it is one of the best performances of Mammootty till date. The actor has managed to come out of the star status. We won't see megastar Mammootty in the movie; it is just Narayanan.

Jewel Mary, who essays Nalini, has played her part well. Shaheen Siddique makes a decent debut as Narayanan and Nalini's son. Siddique, who played Velayudhan deserves a special applause for his performance. He just makes the audience wonder-struck with his performance, even with the minimal screen presence.

The movie is written and directed by Salim Ahamed. The narrative part of the movie has nothing new to offer as the director has opted for a treatment which is similar to his earlier movies.

But he has succeeded in catering the emotional element with at most brilliance; which makes the movie extremely touching. Pathemari may not be the cliched commercial flick which caters to all type of audience. But the honest approach towards a socially relevant theme makes it a must watch movie.

Madhu Ambat handles the cinematography. The visuals have played a key role in making the period drama look convincing. The visuals which were shot in the desert are commendable.

Rasool Pookkutty's sound design adds a magical effect to the movie; thus making it a memorable experience. Vijay Shankar's editing is not up to the marks as, the movie falls into slow pace despite the less duration.

National Award winner Pattanam Rasheed's makeup failed to impress this time. Being a period movie, the makeup has huge relevance in making the characters convincing. But, here the actors looks artificial at certain points. Sameera Saneesh's costumes are perfect.

Music is composed by National Award winning musician Bijibal. The background score and songs perfectly blend with the emotions conveyed by the film and give a soul to the movie.

Pathemari is a tribute to each and every expatriate who sacrificed their happiness for their families. If you are looking for an entertainer, it will disappoint you. Book the tickets if you love quintessential movies.

Go through the slides for the candid pictures and information about the cast and crew...

Mammootty is playing Pallickal Narayanan, an NRI. The actor will feature three different getups in the movie, which travels through the time period from 1980's to 2015.

Sreenivasan plays Moideen, who is a very close friend of Narayanan. He witnesses the ups and downs of Narayanan's life and has a major role in his life.

Siddique plays Velayudhan, a very important role in the film. The team hasn't revealed much about his character.

Shaheen Siddique, Siddique's eldest son makes his acting debut with the movie. He plays Narayanan and Nalini's son in the movie.

The movie is written and directed by Salim Ahamed, who has earlier collaborated with Mammootty, for the highly acclaimed Kunjananthante Kada.

Watch it for the exceptional performances by Mammootty, Sreenivasan and Siddique.