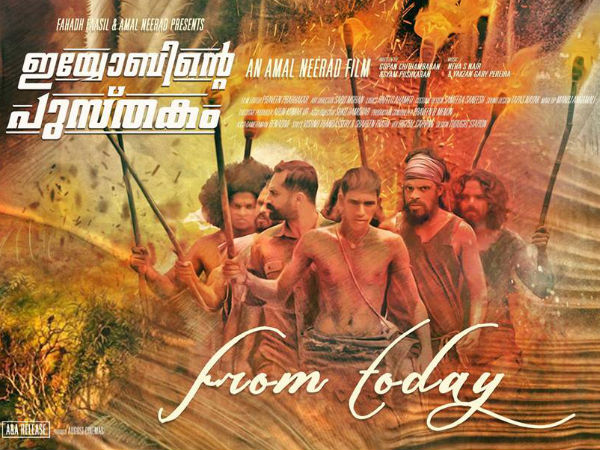 The story progresses through a book, as a reader moves through it. Portrayed is the life of a slave, named Iyob. Although an Indian slave, Iyob (Lal) always supported British rule and his colonial landlord Harison. But things change when his children Dimitri (Chemban Vinod Jose), Ivan (Jinu Joseph) and Aloshy (Fahadh Faasil) grow up.

Dimitri and Ivan, who grows up as spoiled brats, brutally rapes and kills a servant girl. Aloshy, who witnesses this incident, runs away from the home, fearing his brothers. He joins the Bristish Navy as an officer and starts living in Kochi. After long years, Aloshi comes back to Munnar, to marry his childhood love Martha (Isha Sherwani).

Then enters Angoor Ravuther (Jayasurya), a Tamil Muslim businessman who hails from Mysore, with a hidden agenda in his mind. Ravuther creates rifts between Dimitri, Ivan and Aloshy. This forms the crux of the story.

Lal's portrayal of Iyob is nothing less than amazing. Fahadh Faasil delivers a fantastic performance as a short-tempered young man and a passioante lover. Jayasurya, who played the cunning Angoor Ravuther, deserves a special applause for his extra-ordinary screen presence.

Padmapriya playes Rahel to near perfection. Isha Sherwani, who appears as Martha, has nothing much to do in the movie. Lena, Chemban Vinod Jose, Jinu Joseph and Reenu Mathews equally shines in their roles. Rest of the cast also did complete justice to their respective roles. Amala Paul surprises the audience with her item number.

Gopan Chidambaram and Shyam Pushkaran's script is appealing; but falls into low pace at certain points. Director Amal Neerad completely succeeds in bringing the best out of his actors. The director, who is well-known for his extra-ordinary visualization skills, creates a complete visual treat in the silver screen.

The brilliant cinematography by Amal Neerad is the soul of the movie. The stunning visuals convert the the not-so-thrilling plot into an extra-ordinary movie experience. The editing by Praveen Prabhakar is flawless.

Watch it for the extra-ordinary visual treat.