Madhura Raja marks the return of Raja, the character that entertained the masses, through the blockbuster movie Pokkiri Raja. With Madhura Raja, he is returning for another mission and a battle, which assures full on entertainment. How has Madhura Raja turned out to be? Is the film triple strong just like Raja and his team? Read Madhura Raja review to get the answers regarding this.

The core plot of Madhura Raja is set in a different terrain and this time Raja has a different mission to be accomplished. When Raja's dear ones faces an issue with liquor baron in Paamban Thuruthu, Raja comes to the island to deal it in his own style.

To make an entertainer, what is required is a decent script that has the backing of a good storyline. Madhura Raja scores in that part as it has a decent storyline even though it isn't anything new or novel. There are some cliched elements as well in the script. However, the platform for the return of Raja has been laid in a firm way and Uday Krishna, the writer of the film has done his job by adding the necessary elements to make the journey entertaining. The comedy numbers and the mass sequences have worked out extremely well. This time, the emotional angle too gets more importance.

Vysakh, the captain of the ship, deserves a huge round of applause. He is one among those film-makers who rightly knows to elevate even the ordinary scenes. The build up that he gives to some of the sequences are immaculate. The packaging and pacing are completely under control and his brilliant command over the various technical aspects of film-making helps him a lot. Even the placement of the songs are so well that they don't look out of context. Both the halves are equally well-paced even though there are some sluggish moments in the initial parts of the second half. He places those mass moments at the right spots, which only a film-maker who knows the pulse of the audiences could do.

Mammootty's ability to bring back the characters from the past is unmatchable. He portrays Raja in a scintillating way, bringing back the peculiar mannerisms of the character with utmost precision. His energy and screen presence are simply amazing. It is pure delight to see him in such massy roles. Nothing much has to be said about his performance in the emotional sequences as he scores heavily like ever. Jagapathi Babu, who plays the main villain, puts up a convincing performance. Jai plays a crucial role and he does his part pretty well. Anusree, Mahima Nambiar, Anna Reshma Rajan and Poorna play pivotal roles. Salim Kumar scores in many of the sequences. Siddique has also played an important role. Nedumudi Venu, Vijayaraghavan, Aju Varghese, Ramesh Pisharody, Narein, Kalabhavan Shajohn, RK Suresh, Balachandran Chullikkad, Noby etc., are also a part of the star cast.

The fight sequences are splendid and convincing. Especially, the climax fight sequences designed by Peter Hein are the major highlights of the film. It does offer an edge of the seat experiences to the audiences. Gopi Sunder has done a fabulous work with the BGM by placing it in the appropriate portions. The songs are also good, especially Moha Munthiri Chaaru is sure to become a chartbuster. Editing needs to be appreciated as the film doesn't have any lethargic portions.

Madhura Raja is a complete entertainment package and it delivers what it had assured. Definitely, a film that gives 'Triple Strong Entertainment'. 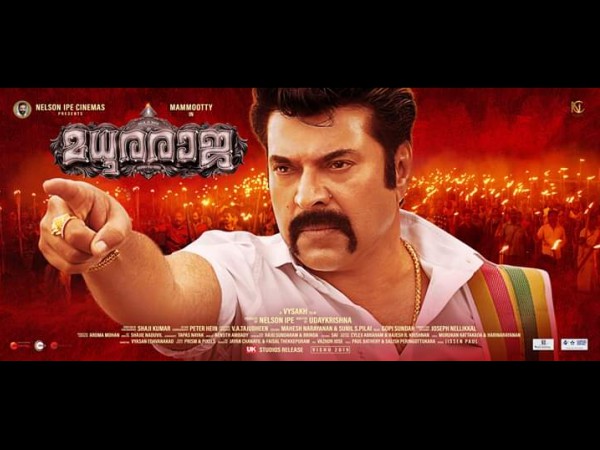