Big Brother is the action-family drama that features Mohanlal as the central character. The movie marks the third collaboration of Mohanlal and Siddique, the senior filmmaker. Reportedly, Big Brother is made with a whopping budget of about 32 Crores and is the most expensive project of director Siddique's career.

Did the Mohanlal starrer meet the expectation of the viewers? Read Big Brother movie review here to know...

Sachidanandan (Mohanlal) has been serving double life imprisonment for the murders of the man who constantly troubled his stepmother and a police officer who harassed his friends in jail. He is finally released from the jail after long 24 years, thanks to the constant efforts of his younger brother Manu (Sarjano Khalid).

However, life in jail has completely changed Sachidanandan who now wants to live peacefully with his family, and he finds it difficult to lead a normal life. Following some unexpected turns of events, Manu is kidnapped and Sachidanandan is forced to return to his old life to save his brother. What happens next forms the crux of the story.

Siddique, the senior filmmaker who has scripted and directed Big Brother, fails to present a completely enjoyable entertainer. The writer-director has visibly given most of his attention towards establishing the larger-than-life onscreen persona of the leading man Mohanlal and his action sequences, while completely ignoring the narrative. The lazily-written main plot and underdeveloped supporting characters make Big Brother a tiring watch and test the patience of the audiences.

The movie could've ended up as a decent entertainer if Siddique had concentrated more on balancing the main plot and developing the characters. The humour elements fall flat without making much impact, which is so unlike a Siddique film. The lack of a solid, engaging narrative makes the already excessively-long film look more stretched. However, Mohanlal's screen presence and the way his character has shaped up might entertain the fans of the complete actor.

Mohanlal delivers a decent performance as Sachidanandan and performs well in the action sequences, as expected. Arbaaz Khan, who appears as Vedantham IPS, manages to make an impact with his screen presence. But the actor disappoints when it comes to effective dialogue delivery (dubbing voice by Vineeth) as the lip-syncing issues are quite visible. Also, he doesn't get much to perform in the under-written character.

Jithu Damodar's cinematography is decent in most of the parts, especially when it comes to the song sequences. But the action sequences could've shot better. KR Gowri Shankar's editing is not up to the mark as the excess running time (2 hours and 45 minutes) and stretched action scenes test the patience.

Deepak Dev's songs are okay. But the song placements do affect the main plot negatively. But the musician scores with the effective background score, which provides the much-needed energy to the narrative.

Mohanlal is the only saving grace in this tiring family drama that tests your patience. Watch it if you are a die-hard fan of the complete actor and loves his larger-than-life characters. 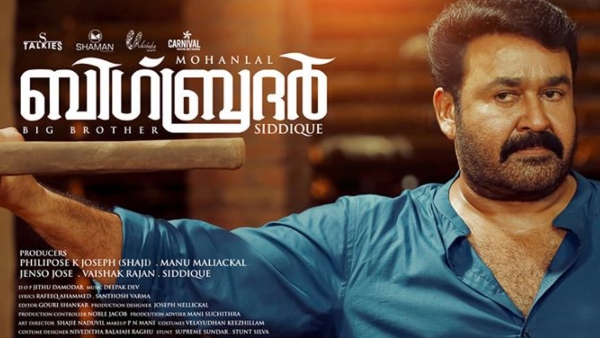 Big Brother Twitter Review: Here's What The Audiences Feel About The Mohanlal Starrer!