Shylock is the mass entertainer that features Mammootty in the titular role. The movie marks the megastar's third collaboration with director Ajai Vasudev, after the successful outings Rajadhi Raja and Masterpiece. Shylock is produced by Joby George, under the banner Goodwill Entertainments.

Did the Mammootty starrer meet the expectations of the audiences? Read Shylock movie review here, to know...

Boss (Mammootty) is a ruthless moneylender who mainly finances the film industry. He is also a complete movie buff. Prathapa Varma (Kalabhavan Shahjohn), a popular film producer cheats Boss by not repaying the money he borrowed from him and further upsets him by ignoring his phone calls.

However, Boss retaliates in an unimaginable way and causes great trouble for Prathapa Varma. The producer decides to eliminate the moneylender from his way, with the help of his close friend Felix John (Siddique), the city police commissioner. But Boss has his own motives behind messing up with Prathapa Varma. What happens next forms the crux of the story.

Ajai Vasudev, the director and writer duo Aneesh Ahamed-Bibin Mohan have successfully created a complete treat for the diehard fans of Mammootty, the megastar. Shylock is an out-and-out Mammootty show, which is backed by a template story and narration. The director has presented the megastar in his most-energetic avatar we have seen in the recent past, in the movie.

From exceptional build-up scenes to mass dialogues to constant Rajinikanth and Vijay references, Shylock has every possible element which is needed for a commercial extravaganza. But the director overdoes with the constant cinema references, punch lines, and repetitive mass scenes after a certain point, which becomes tiring to watch and spoils the overall impact.

As a formula mass entertainer, Shylock is a satisfying watch. But for the movie fanatics who love to watch a well-made cinema and the performance of Mammootty, the gifted actor, Shylock will be a disappointing experience.

Mammootty is simply brilliant in the role of Boss, the moneylender. The megastar steals the show with his exceptional energy and screen presence. However, the character doesn't offer him much scope to perform. Rajkiran, the senior actor who appears as Ayyanar, has played his character to near perfection. Meena, who essays the role of Lakshmi, has nothing much to do in her under-written role.

Kalabhavan Shajoh and Siddique, the actors who played the roles of antagonists Prathapa Varma and Felix John respectively, have excelled as the lead antagonists. Hareesh Kanaran and Baiju have totally shined in the comical sequences. The rest of the star cast too, are good in their respective roles.

Ranadive, the young cinematographer has done a great job with the visualization of Shylock. The effective editing has made the Mammootty starrer an engaging watch.

Gopi Sundar, the National award-winning musician has done a decent job with the songs. The background score too is excellent and totally sinks in with the mood of the mass entertainer.

Shylock is a perfect treat for the die-hard fans of Mammootty, the megastar and audiences who love formula mass entertainers. However, the movie will disappoint the movie fanatics who want to watch a well-made cinema and Mammootty, the actor perform. 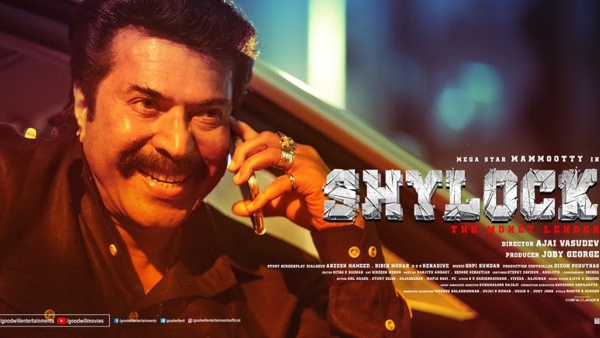