Trance is a Malayalam drama film that features Fahadh Faasil in the lead role. The movie marks the comeback of popular filmmaker Anwar Rasheed after a long gap of 8 years. Nazriya Nazim appears as the female lead opposite Fahadh Faasil in Trance, which is scripted by Vincent Vadakkan.

Viju Prasad (Fahadh Faasil) is a struggling motivational speaker from Kanyakumari. Viju relocates to Mumbai after an unfortunate incident turns his life upside down. In Mumbai, he meets Rozario (Gautham Menon) and Gilbert (Chemban Vinod Jose) and joins them, taking the new identity of Pastor Joshua Carlton. Meanwhile, he also crosses paths with Esther Lopez (Nazriya Nazim). What happens to Viju's life after his new friendships in Mumbai forms the crux of the story.

Director Anwar Rasheed and writer Vincent Vadakkan truly deserve a big applause for making Trance, which is unarguably one of the bravest films ever made in Malayalam so far. The movie deals with a highly sensitive topic with utmost sensibility. The first half of the movie is totally on point with the engaging narrative, great style, amazing visuals, and perfect pace.

But, the second half doesn't quite match up with the standards set by the excellent first half. Even though the extremely stylish making saves the show, the second half loses its grip at certain points, especially when it comes to the picturing of Joshua's thought process. Also, the Joshua-Esther track looks forced and dragged.

However, Trance is nothing like you have seen or experienced in the Malayalam cinema before. Even if the Anwar Rasheed directorial might not be everyone's cup of tea, this gutsy film will surely impress the audiences who love unique movie experiences.

Fahadh Faasil is one of those rare actors who constantly reinvents himself with every passing film. The National Award winner's brilliant performance is unarguably the heart and soul of Trance. Fahadh truly astonishes in the role of Viju Prasad with his impeccable acting skills and unmatchable energy. The actor once again proves that he is one of the finest actors of Indian cinema.

Nazriya Nazim has finally shed her bubbly, girl next door image with the character Esther Lopez, and has played her part perfectly. Gautham Menon, the filmmaker who appears as Rozario, has excelled in his part. The rest of the star cast, including Soubin Shahir, Dileesh Pothan, Chemban Vinod Jose, Vinayakan, Sreenath Bhasi, Arjun Ashokan, Unnimaya Prasad, and so on, have played their respective roles to near perfection.

Amal Neerad once again proves he is one of the best cinematographers we have, with the extraordinary visuals of Trance. The brilliant cinematography makes the Anwar Rasheed directorial a visually-enthralling theatre experience. Praveen Prabhakar's editing is not up to the mark, as the movie loses its pace in the second half.

Jackson Vijayan makes a fantastic debut with the unique soundtrack of the movie, which totally goes hand-in-hand with the narrative. The background score by Jackson Vijayan and Sushin Shyam is just fantastic and completely elevates the overall experience.

Trance is a gutsy attempt and a totally unique movie experience. Watch it for the brilliant performances by the star cast, especially Fahadh Faasil, and the extraordinary theatre experience. But, this Anwar Rasheed movie is definitely not everyone's cup of tea. 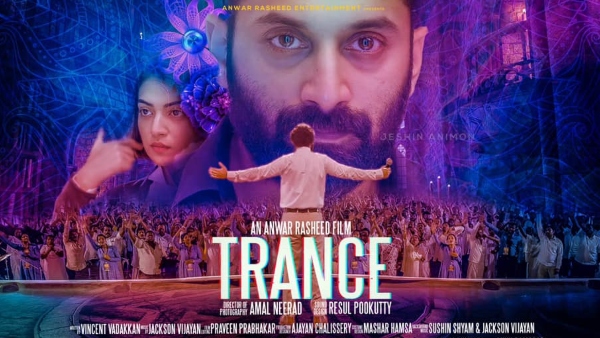