Manu Warrier's socio-political drama Kuruthi released today (August 11) on Amazon Prime Video. Backed by Supriya Menon under the banner Prithviraj Productions, the film features an ensemble cast including Prithviraj Sukumaran, Roshan Mathew, Murali Gopy, Shine Tom Chacko, Srindaa, Mamukkoya and Manikandan R Achari. Though the film was initially planned to release in theatres on May 13, the makers had to postpone it due to the pandemic.

Did the Prithviraj-Roshan Mathew-starrer impress the audiences and critics who were eagerly waiting for the film? Let's find out!

"Man always needs something to hate. To maintain that hatred, there will always be 'them' and us'", opines Moosa (played by Mamukkoya) when youngsters engage in a deadly brawl while defending themselves. Well, hate, vengeance and communal divide are the basic subjects of the film around which the main plot of Kuruthi revolves.

The film opens with a handcuffed man trying to escape from the grip of a person sitting on the bumper of a police jeep. Before we contemplate the whole sequence, the story introduces Ibrahim (Roshan Mathew), a rubber tapping labourer who is struggling to come to terms with the death of his wife and daughter who he loses during an unfortunate landslide. His Hindu neighbour Suma, who lives with her brother helps Ibrahim with domestic chores and even expresses her love for him at one point of time.

Well, things take a turn for the worse when an injured cop (Murali Gopy) barges into his house with a young murderer, seeking (demanding-to be precise) shelter for a night. The tense situation gets more complicated when a vengeful Laiq (Prithviraj Sukumaran) follows the duo into Ibrahim's house with the help of a common friend Kareem (Shine Tom Chacko). 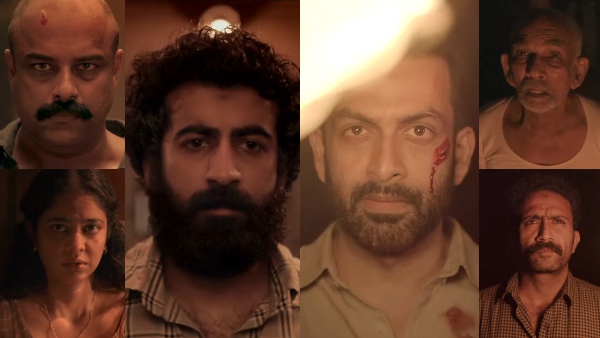 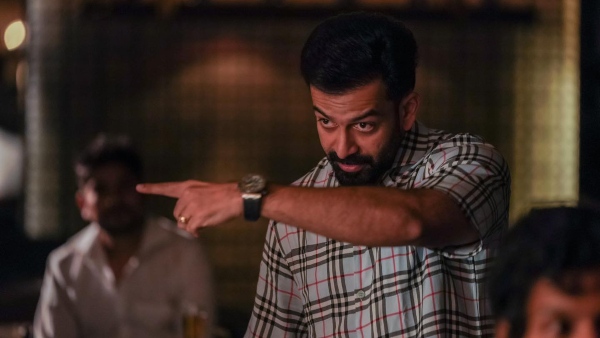 It is later known that the young murderer, a Hindu has killed a Muslim shopkeeper, and to take revenge for the same Laiq and Kareem seek and even expect that Ibrahim would help them, considering that he too is from their community. On the other hand, the cop requests Ibrahim to take an oath on Quran that he would protect the murderer and handover him to to the police the next morning. Amid the chaos, what will Ibrahim choose? Well, you will have to watch Kuruthi on Amazon Prime Video to know what unfolds at the end.

Choosing a bold subject like communal divide and penning a story around it with a lot of thrills and chills is not an easy task. Anish Pallyal's scripting is undoubtedly the soul of the film. The storyline is crisp, gripping and unpredictable at most places. The film has all the elements of a thriller, all thanks to the scriptwriter.

Given that we have already witnessed Prithviraj acing monologues like a pro in his previous ventures, the writer has made sure his dialogues don't turn monotonous and repetitive in Kuruthi. Manu Warrier, the director of the film has given equal space to each and every character involved in the film, which makes the thriller stand out from the rest. The leading man appears just before the intermission and we are happy that the stereotypical trend is changing and it indeed is proof that a film needs a good story for it to be successful and the hero can actually wait.

Mamukkoya: Meet the real hero of Kuruthi! The senior actor's taunts and sporadic comic dialogues are the highlights of the film. Despite being in a serious situation, where one person wants to kills the other, Mamukkoya's raw performance and rational dialogues about death, revenge and religion make our hearts full. Do no miss his swag towards the end.

Prithviraj: The versatile actor has nailed the grey-shaded character of Laiq with utter ease. Though in a few sequences we feel empathetic towards his character, the actor with his nuanced performance makes sure the audiences are not inclined to his side. The action sequences (choreographed by him) and of course his dialogue delivery deserves extra brownie points.

Roshan Mathew: From the start till the end, the actor's expressive eyes do all the talking. His performance as Ibrahim is so effortless, convincing and captivating at the same time, that we simply couldn't resist but ask for more.

Each and every actor in the film including Srindaa, Murali Gopy, Shine Tom Chacko, Manikandan R Achari and Navas Vallikunnu deserve special mention.

Cinematographer Abinandhan Ramanujam has done impeccable work with the lens. He undoubtedly deserves applause for the visual treatment that blends perfectly with the storyline. A darker colour palette has been used in most sequences which have only added depth to the breathtaking visuals. Akhilesh Mohan's editing has helped the film steer clear of unwanted lags and stretches. Jakes Bejoy's songs and background scores have added the right impact.

This Prithviraj-Roshan Mathew-starrer is a bold film that encapsulates a powerful message. The entire cast and crew behind the masterpiece deserve a standing ovation for their exemplary work. From the script to the solid performances of the actors, anything and everything about Kuruthi seems picture perfect.