American singer Ariana Grande and real-estate agent Dalton Gomez recently tied the knot in a private ceremony. The duo who got engaged five months ago, said their vows in a ceremony attended by family members only.

According to People magazine, the ceremony took place at the couple's home in Montecito, California. A representative of the singer had told the magazine, "They got married. It was tiny and intimate - less than 20 people. The room was so happy and full of love. The couple and both families couldn't be happier." A week after the wedding, Ariana has finally shared pictures from her wedding on her Instagram account.

In a series of posts, Ari shared pictures from before and after the ceremony. She captioned the first kiss picture with the wedding date as the caption, "5.15.21 ?" Take a look at the post: 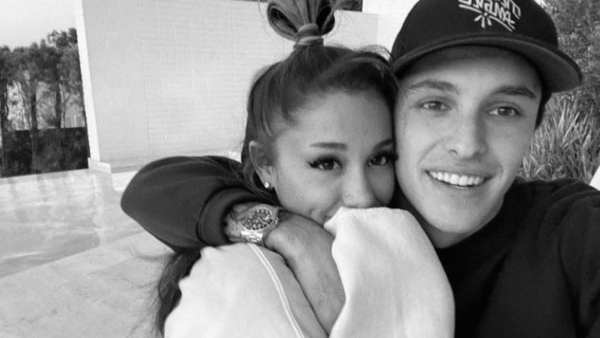 Another post showed the singer in her lily-white silk wedding gown. According to Vogue, she wore a custom lily-white silk charmeuse empire waist column gown by Vera Wang. "The wedding dress was accented with a sculpted neckline, an exposed bra strap closure, and a plunging back," read the magazine report. She paired the wedding gown with pearl and diamond earrings matching her engagement ring.

The third post showed the two kissing in a black and white picture. Dalton reportedly opted for a Tom Ford suit for the special day.

The two had been dating since January 2020. Their relationship first became public when TMZ spotted them kissing at a restaurant in February 2020. They were reportedly living together during the lockdown and got closer to each other. The two also appeared together in Ariana's music video for 'Stuck With You'.