The 63rd Grammy Awards honoured the biggest and most loved records and artists of the year on March 14. Due to the pandemic, the audience this year were only the nominees and performers including Harry Styles, HAIM sisters, Billie Eilish, Taylor Swift, BTS and others. The show kicked off at 8 pm Sunday (March 14) in the US, and 5:30 am IST for the Indian audience, hosted by Trevor Noah of The Daily Show.

The biggest mentions of the night belong to Beyoncé who had bagged 9 nominations, followed by Taylor Swift, Dua Lipa and Roddy Ricch with six nominations each.

Ringo from The Beatles presented the Record of The Year award to Billie Elish for 'Everything I Wanted'. Other nominees for the final win of the night were Black Pumas, Doja Cat, Dua Lipa, Beyoncé, Megan Thee Stallion and others.

While accepting the award, Billie went on to share that it was embarrassing to give the speech as she believed Megan was more deserving of the award. She dedicated her entire speech to Megan and added, "Seriously, can you just cheer for Megan Thee Stallion."

Taylor Swift Takes Home Album Of The Year For Folklore

Taylor Swift who had bagged six Grammy nominations for 2021, took home one of the biggest awards of the night. The singer-songwriter won Album Of The Year for Folklore.

Swift thanked her collaborators including Bon Iver, with whom she worked through the COVID-19 pandemic and said, "Justin Vernon, I'm so excited to meet you someday."

The latest win marks Taylor's 11th Grammy win and echoed her last win in the category for 1989, five years ago.

Beyoncé won the Best R&B Performance and made history by becoming the only artist (male and female) ever to win 28 Grammys. During her acceptance speech, Beyoncé also thanked her three kids watching from home and congratulated the oldest daughter Ivy for her first Grammy.

Beyoncé who has been working since the age of nine, broke the previous Grammy record of 27 awards set by bluegrass artist Alison Krauss.

Dua Lipa took home one of the biggest awards of the night. She won the Best Pop Vocal Album for Future Nostalgia and thanked her entire team and fans during her acceptance speech.

Dua was also nominated for five other categories including Pop Solo, Pop Duo/Group, Best Album, Best Song and Best Record Of The Year.

H.E.R Bags Song Of The Year For I Can't Breathe

Among 'Black Parade', 'Cardigan', 'If The World Was Ending', 'The Box', 'I Can't Breathe', 'Circles' and 'Don't Start Now', Trevor Noah announced the Grammy winner as Dernst Emile II, H.E.R. & Tiara Thomas for 'I Can't Breathe'.

In her acceptance speech H.E.R called for change and said, "We are the change we want to see. That fight that we had in us in June 2020, keep that same energy."

Megan Thee Stallion after owning the stage with Cardi B, won the third Grammy of the night. Megan took the stage with Beyoncé to accept the award for Best Rap Song and revealed that she always wanted to be the rap version of Beyoncé.

Trevor then went on to reveal that Beyoncé has now tied at 27 Grammys wins and made history as the only artist (male and female) to win the highest number of Grammys.

Best Country Album was won by Miranda Lambert for Wildcard. She later went on to perform at the Grammys alongside fellow female artists to celebrate the female voices in the country music industry.

Soon after, Trevor introduced Taylor as the next performer and Twitter was immediately flooded with appreciation tweets for the singer-songwriter. Taylor performed three songs from the recent albums titled, 'Willow' 'August' and 'Cardigan'.

It has already been deemed as one of the best Grammys 2021 performances.

Lizzo announced the first winner of the night for the Best New Artist as Megan Thee Stallion. Megan has also been nominated for Record of the Year and Best Rap Song.

Notably, Megan Thee Stallion also won the historic Best Rap Performance along with Beyoncé for 'Savage Remix', which has landed them in Guinness World Records.

Trevor Noah began the night from Los Angeles and kicked off the awards ceremony with performances from Harry Styles, Billie Eilish and HAIM sisters.

While Harry sang 'Watermelon Sugar' for his Grammys performance, Billie who is nominated for the Best Solo Performance was joined by her brother FINNEAS.

The awards for the night will be presented from the New York's The Apollo Theater, Nashville's The Station Inn and L.A's the Troubadour and The Hotel Café.

Some artists have already picked up awards during the pre-ceremony event. Beyoncé along with her 9-year-old daughter Blue Ivy Carter for 'Savage' and 'Brown Skin Girl'. According to reports, Ivy is now the second youngest person to win a Grammy. John Prine and Chick Corea were also honoured with Grammys posthumously in the pre-ceremony.

The Recording Academy on Sunday also honoured the general managers and owners of the venues, bartenders, box office managers, and day-to-day employees at all four select venues across the US. 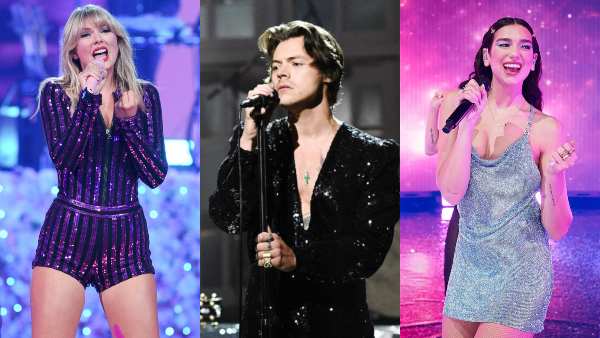