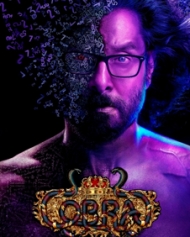 Cobra is a Tamil action thriller movie written and directed by R. Ajay Gnanamuthu of Imaikkaa Nodigal fame. The movie starring Vikram, Srinidhi Shetty, Irfan Pathan and Anand Raj. The movie produced by S. S. Lalit Kumar under the production banner '7 Screen Studio'. A. R. Rahman scores the music for the movie, while Harish Kannan is the cinematographer and Bhuvan Srinivasan works as the editor. The movie directer Ajay Gnanamuthu is well known for his previous hits Demonte Colony and Imaikkaa Nodigal.
Story
Madhi is a math teacher/assassin, who uses his revenue to sponsor orphanages and charity homes. He has a traumatic childhood and a genetic gift, and the combination naturally leaves him with some psychological issues. While battling with the dilemma of whether to accept or reject the interest shown by Bhavana, played by Srinidhi Shetty, Madhi also has to handle an Interpol officer on his track. Meanwhile, the boss man who has been benefiting from the genius' assignments turns against him, to save his own skin.
The title was announced on 25 December 2019. The satellite rights of the film is sold to Kalaignar TV while digital streaming rights are through SonyLIV. Cobra is scheduled to be released theatrically on 31 August 2022.
Ott
The movie Cobra is available on Sony Liv from Sept 28, 2022.