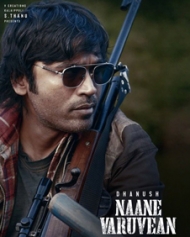 Naane Varuven is a Tamil action, horror, thriller movie written and directed by Selvaraghavan. The movie star cast includes Dhanush in the lead role. The movie was produced by Kalaipuli S. Dhanu under the banner V Creations. The film's music is composed by Yuvan Shankar Raja while cinematography is handled by Om Prakash and editing is done by Prasanna GK.
Story
Kathir and Prabhu (Dhanush) are twin brothers who are poles apart from each other in behaviour. While Prabhu is a docile and good-natured man, Kathir is a disturbed individual, who comes across as a sociopath.
The story shifts to Chennai after 20 years and it cuts to Prabhu getting married to Bhuvana (Indhuja). They give birth to a daughter, Satya. However, the happy-go-lucky family of theirs begins to change when Satya has visions of a person in her dreams. She begins communicating with him.
After visiting a Psychiatrist, Prabhu learns that Satya is being tormented by an imaginary character whom she calls Sonu. Who is Sonu, what is the relation between Sonu and Satya, what happened to Kathir is all about Naane Varuvean that you have to find out on the screen.
The movie is scheduled to release on Sept 29, 2022. The satellite rights to the movie was sold to Sun TV.