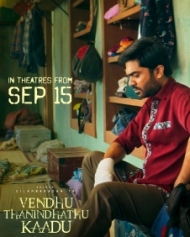 Vendhu Thanindhathu Kaadu is a Tamil action, romance movie written and directed by Gautham Vasudev Menon. The movie has Silambarasan TR in the lead role. The movie is being produced by Ishari K. Ganesh. The music is composed by AR Rahman, while cinematography handled by Siddhartha Nuni and editing by Anthony.
Plot Line
The story revolves youngster who comes to the city and faces struggles for the identity of himself and his low caste members.
The first look poster along with the movie title announcement happened on August 06, 2021. Gautham and Silambarasan had previousluy worked together in Vinnaithaandi Varuvaayaa, Achcham Yenbadhu Madamaiyada and the short film Karthik Dial Seytha Yenn.
Release
The movie is scheduled to release in theatres on 15 September 2022, by Red Giant Movies. Amazon Prime Video acquired the digital release and satellite rights of the Tamil version are owned by Kalaignar TV.