What Ajith Kumar's fans have been waiting for all these months is finally before them. Arrambam (Aarambam), the movie, which has been desperately waited for its release by the Thala's followers has hit the screens today (October 31) in India and on Wednesday (October 30) in foreign countries. 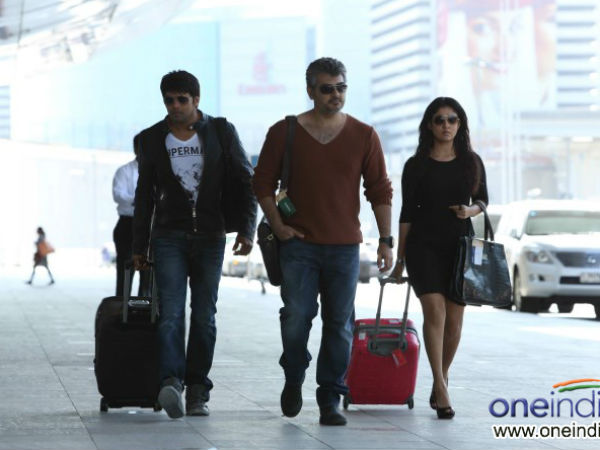 Story (As Per Online Tweets)
It is said to be a revenge story. Reports say that Ajith Kumar, whose character name is Ashok, will be seen in the role of a cop along with his friend played by Telugu actor Rana Daggubati. The title track 'Adadada arrambame' comes as an introduction song. Mahesh Manjrekar plays the role of a minister, who is into illegal activity.

Ashok convinces good-guy superhacker to join him in his mission. Tapasee Pannu plays the role of Arya's girlfriend, whereas Nayantara is the love interest of Ajith Kumar. How all these characters get connected to each other form the crux of Arrambam story.

Here, we are bringing you the reviews posted by audience, who have seen the movie abroad and posted on various social networking sites.

Find it on the slideshow...

Reports say that Arrambam is inspired by some Hollywood movies including Sword Fish. But fans of Ajith have denied it on social networking sites.

#Arrambam cannot be compared with 'Sword Fish' or any other film! (Maybe the hacking bit is inspired) #Vishnu has done a brilliant job!

Done with #Arrambam & returning without any disappointment! Class + Mass! Avoid others review and watch it yourself! Surely a Hit!

The movie is carrying positive words in large. However, we have to wait some more time until it gets official.

Excessive dose of violence in the flashback episode...to some extent justified though #Arrambam
Terrific scene between Ajith and Atul Kulkarni...#Thala nailed it #Arrambam

A complete episode in the 2nd half has a strong reference to an infamous Mumbai incident...good try but little lengthy #Arrambam

All twists revealed but one I guess..movie running flat...dir trying some naive tricks to generate some interest #Arrambam

First 15mins film wil b at 50KMPH From the plot opens to intervel 200kmph.. Second half 250kmph. Out and out @vishnu_dir team show #Arrambam

If someone says Ajith never does a film for general audience commercial movie goers action lovers .. The answer. #Arrambam ..

Came back from #Arrambam London and I have to say, it is an entertaining movie with Ajith and Arya carring the movie themselves! 3.5/5.

Thanks for making #Arrambam an enjoyable, entertaining movie. I've already booked my repeat shows for tomorrow and Friday. :)

Arrambam is a high-tech thriller. Ajith is charismatic as always.

Arrambam is a stylish action thriller. My rating on Arrambam - 4

#Vishnuvardhan has given enough screen space for all the leading stars! #Ajith aka #AK's performance is surely unique & stylish!

Great Work @vishnu_dir.. You Deserve to be a Cool Director..!! Maestro @Raja_Yuvan is Awesome as the Same ..!! #Thala #Arrambam

Arrambam is the movie version of MARANA MASS! #Thala #Ajith at his best. No more mankatha da, it's Arrambam da!!! Ajith fan review

If billa and mankatha was awesome thn arrambam is gonna be the best everrr ! #truly #entertained #Arrambam #2013 #deepavali