While some performances were loved by fans, many were hailed by critics as well. Sadly, few movies failed to keep the cash registers ringing even though it encased brilliant performances by the artists. 2014 was a mixture of good movies accompanied by good performances and also good performances caught up in bad movies.

Having said that, it is the responsibility of fans to pick up their favourite performer even if it means the performance had come in an unappealing movie. Best actor is someone who brings out the actual emotions on screen that we see in our everyday life. For some, best actor might also be that performer who makes them to forget about their worries by keeping them hooked while they are inside the cinema hall.

We have handpicked few actors who have managed to fulfill both the above mentioned criteria and now it is left to you to pick your favourite Tamil actor of 2014. Before we introduce you to our nominees, we would like to remind you that they have been picked based on their performances and critical recognition.

Please cast your vote for your favourite actor and showcase your support towards him. Remember, even a single vote can make a huge difference and it will also encourage your favourite star to come up with many such smashing performances in the future. And the nominees are (in the slides below) 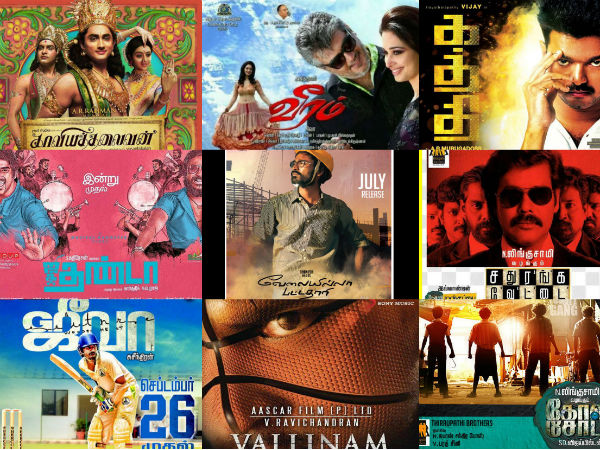 Thala Ajith had once again exhibited a scintillating performance by showcasing various emotions like dilemma, anger, love towards his brothers, undisclosed love towards the female lead and many more. His performance in the movie was controlled well and was up to the mark.

The Mayakkam Enna actor stood out throughout the movie with his fantastic performance. Be it his curiosity to check out the girl next door, his frustration as an unemployed engineer, his jealousy towards his own brother, his emotions after losing his mother and then his courage while encountering his enemies, Dhanush's performance was a complete package in the movie.

Dinesh played the role of a blind person in Cuckoo and managed to steal many hearts with his mind-blowing performance. Many critics even said that Dinesh's act is one among the best when it comes to portraying a blind man in Tamil cinema.

Rajinikanth had carried the entire film on his shoulder. His role as Raja Lingeshwaran was portrayed perfectly which was combined with some powerful dialogues. Though the movie received mixed reviews, Rajinikanth's performance in the film can never be questioned.

The script of Kaaviya Thalaivan demanded strong performances by its actors and Siddharth did not disappoint. His role as a drama artiste who belonged to the pre-independence era was executed to perfection. Siddharth did not have a choice but to exhibit a wide range of emotions in the movie, and he had done more than justice to his character.

Sivakarthikeyan, apart from bringing in comical values to the movie also displayed a variety of expressions as an amateur boxer. His performance was liked by all classes of people and also was appreciated by critics. Sivakarthikeyan is an improved actor and this movie is a classic example.

Though this movie did not work out according to its director's wish and attracted major criticisms from critics as well as fans, Surya's act cannot be ignored. In fact many would accept that the only positive about Anjaan was Surya's engaging performance.

Kaththi was a huge success at the box office and Vijay's performance contributed handsomely towards it. Both the characters played by Vijay was portrayed neatly and our Ilayathalapathy had managed to bring out differences while playing two different roles even without great help from costumes or make-up to differentiate between two characters.

In this movie Vishal had dished out a laudable performance without exhibiting heroism or delivering punch lines which suited his character brilliantly. His role as a narcolepsy patient was furnished well and there was originality in his acting when he was asked to faint each and every time in the movie.