Actress Nayanthara, one of the biggest stars in South cinema, started off 2019 on a terrific note when Viswasam opened to a fantastic response at the box office and emerged as a runaway hit. In fact, such was the craze surrounding the Siva movie that it beat the Rajinikanth starrer Petta rather comfortably and won the Pongal battle.

With Viswasam in the past, 'Thalaivi is back with her latest film Airaa which hit screens on Thursday (March 28, 2019) and opened to an okayish response at the box office. The film, featuring Nayan in a double role, is a horror-thriller and has clicked with the target audience despite receiving mixed reviews.

Now, in an unfortunate development, Airaa has been leaked online by Tamilrockers and is available for free download. The leak, which has ruffled quite a few feathers, is likely to affect the film's collections big time.

Meanwhile, Airaa has become a big trend on social media. Here are some of the top tweets.

Coming to #Airaa, its #Nayanthara show all the way. She rocked in the roles of Bhavani and in the bold, Yamuna. With the stardom she has, one needs to applaud her for the gutsy act for preferring this film. A laudable effort!

Looking at the artificial praises of #Airaa by online trackers, looks like a flop for lady megastar🤭 I have now understood the nuance of online tracker's reviews😊 they write reviews to please their followers including celebs..

Totally in love with Bhavani!Her performance in some emotional scenes proves why she is the LADYSUPERSTAR!! #Airaa

he perfect movie to showcase the talents and acting prowess of Lady Super Star, Nayan. Kalaiarasan, a show stealer. Too underated. Fantastic cast.. One of the best movies to watch in theatres. @kjr_studios is continuing its winning streak. #Airaa 4/5 in my opinion. 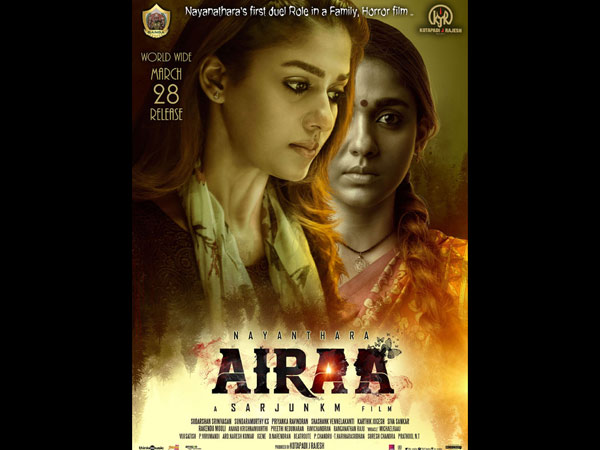