Superstar Rajinikanth, who is awaiting the release of his upcoming flick Darbar was recently seen posing with veteran actress Khushboo's younger daughter Anandita. Khushboo took to her social media handles to share the picture of her daughter along with Rajinikanth. Her Instagram caption read, "When a 16 yr old is a die-hard fan of the one and only #SuperStar .Anandita is completely blown away by his style and simplicity..She froze the minute she saw him.. Thalaivar na thalaivardhaan..".

The actress had an altogether different caption for her Twitter handle for the same picture. Her Twitter post read, "My little one's dream come true.. her heart skipped a beat the moment she saw the SUPERSTAR.. thank you @rajinikanth sir for your time and blessings..your simplicity bowled her over." Her daughter posted a number of pictures too on her social media pages, which had Rajnikanth's autograph. The picture has been going viral on social media ever since it was posted.

"She is really blessed to be with god's men...his spirituality will spread positive vibes to everyone around him..."

"Wow.. Surprised to see it's the first time she is meeting Thalaivar"

Take a look at the picture below:

It looks like Rajini's next project with Siruthai Siva, tentatively titled as 'Thalaivar 168', has begun its shooting schedule in Hyderabad. The film is a multi-starrer comprising of Rajinikanth, Keerthy Suresh, Meena, Khushboo, Prakash Raj, Soori and Sathish as the main cast. D Imman is composing the music for the film, while Sun Pictures is producing it.

Apart from the busy schedule of Thalaivar 168, Rajini is currently awaiting the release of his super-cop flick Darbar. The 2.0 actor will play cop Aditya Arunachalam in Darbar. Directed by AR Murugadoss, the film has Nayanthara pairing up with Rajini. It has Anirudh Ravichander composing the background score. The audio tracks of Darbar are already a blockbuster, especially 'Chumma Kizhi'. Darbar is all set to hit the screens on January 9. The movie has Bollywood star Suniel Shetty playing the villain opposite Rajinikanth. 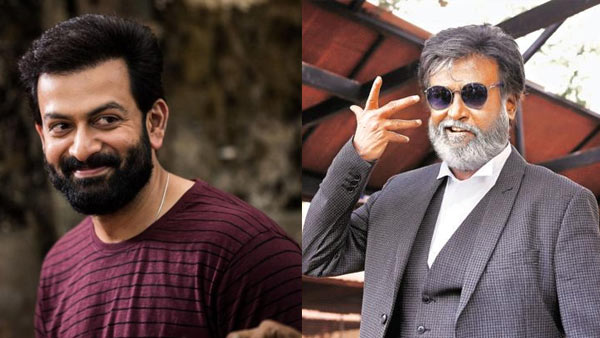 Prithviraj Sukumaran On Rajinikanth: Reveals Why He Turned Down The Offer To Direct Rajinikanth!