The wait is finally over as makers of the highly anticipated film Cobra have dropped the first single from the movie. Releasing the song, they shared a picture from the movie featuring the lead actors Vikram and Srinidhi Shetty, decked up in traditional attire, in an engagement ceremony.

Titled 'Thumbi Thullal', the song has been crooned by Shreya Ghoshal and Nakul Abhyankar. The catchy lyrics with the complementing beats are indeed impressive, making the fans' wait worthwhile. Composed by music maestro AR Rahman, 'Thumbi Thullal' is an outstanding treat. The song is now exclusively available on music streaming platform, Jio Saavn.

For the unversed, the Cobra movie team had announced the song release a few days ago, with a special invitation card, which had caricature of Chiyaan Vikram and Srindhi. As soon as the invite was dropped, the internet was taken by storm, thanks to the creative idea that impressed the netizens.

On a related note, Cobra has almost 40-45% of the shoot remaining including a high-octane climax scene. Reportedly, Chiyaan Vikram will feature in 20 different avatars in the thriller. Earlier, the movie was scheduled for a summer 2020 release, but due to the sudden COVID-19 outbreak, it has been postponed for an indefinite period. Touted to be a spy thriller, the movie went on floors in November 2019. Shot in various cities like Chennai, Kochi and Kolkatta, the cast and crew were finally shooting an important sequence in Russia, during which the pandemic hit the world, making them rush back to India. 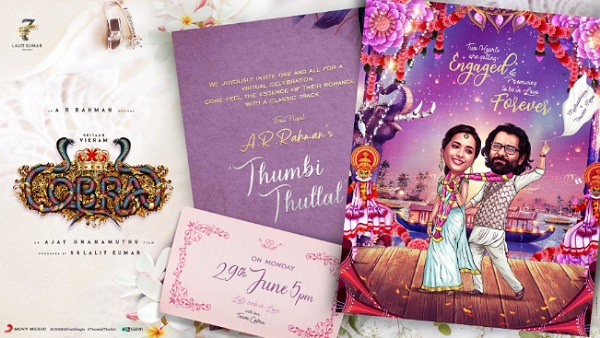 Cobra Movie First Single To Be Out On Monday At 5 PM; Vikram And Team Issue An Open Invite