The controversial actress and self-proclaimed supermodel Meera Mitun has been attacking many renowned Kollywood celebrities on social media. She has indeed started trending #KollywoodMafia on Twitter and tagged actors like Trisha, Aishwarya Rajesh, Kamal Haasan, Vijay and others. She also called Trisha, Dhanush, Malavika Mohanan and others 'products of nepotism'.

And now, Meera Mitun's next targets are Suriya and his actress-wife Jyotika. Meera has released a video in which she said that whenever she tweets about her achievements, Vijay and Suriya fans troll her with abusive words. She has challenged them to use the same words against actress Jyotika and Vijay's wife Sangeetha. She also threatened to post abusive tweets about Jyotika and Sangeetha if Vijay and Suriya fans don't stop.


Well, this video didn't go down well with actress Sanam Shetty as she warned Meera Mitun to stop doing such acts. Sharing a video of herself on Twitter, Sanam tagged Meera Mitun and wrote, "@meera_mitun u have crossed ur limit today! Don't mock the genuine efforts of @suryaoff sir and Jyothika mam. They help thousands of underprivileged children through Agaram foundation. Don't backstab ppl who hv helped u. #actorsurya #actorjyothika #stophatred."

Watch the video here:
In the video, Sanam Shetty said that Meera Mitun got a huge fan following after featuring in Suriya-starrer and produced film, Thaanaa Serndha Koottam (2018) for a minute. She slammed her for saying that Suriya doesn't know acting. Sanam Shetty further said that it's none of Meera's concern if Suriya takes too many long takes in his own production. Calling him a perfectionist, Sanam said that Meera should be thankful to Suriya for giving a role in his movie instead of trolling him. 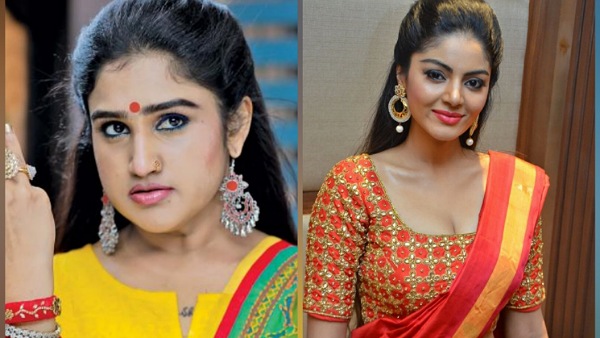 Moreover, Sanam Shetty warned Meera Mitun and said that she has crossed her limit. She asked her not to mock genuine efforts of Suriya and Jyotika, as they help thousands of underprivileged children through Agaram Foundation. Sanam said, "Do something good for the people, I will support you."