The Diwali season is just around the corner! Unlike last year, that saw the closure of theatres and a very few OTT releases, this time, the cine-goers are going to have a gala time as films are returning in massive numbers. For Tamil movie buffs, it's the time of the year when they celebrate the festival of lights with much fanfare as it also marks the occasion when biggies of Kollywood hit the big screens.

This year, we have the most awaited film releasing- Annaatthe starring Dadasaheb Phalke Award recipient Rajinikanth, which no doubt is going to be a showstopper at the theatres. Though the film was expected to clash with Silamabarasan's Maanaadu on Diwali, the makers decided to postpone the release date to November 25.

Jai Bhim: 5 Reason Why We Can't Wait To Watch The Suriya Starrer! 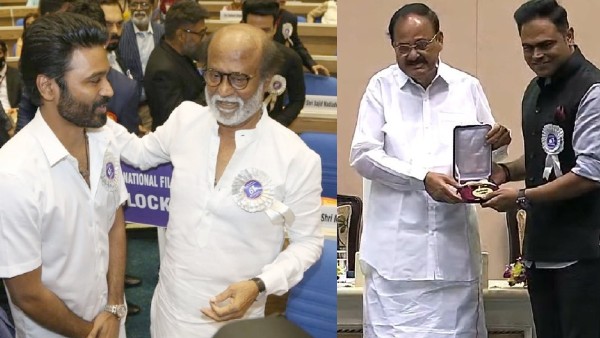 Still worried about the pandemic and safety measures in public places? Well, don't fret as another biggie from Kollywood, Jai Bhim featuring Suriya will be hitting Amazon Prime Video on the festive occasion, which you can enjoy sitting at home. What more? Well, you will have to scroll down the page to decide on which film to watch this Diwali season with your family, and yes do follow all required COVID-19 protocols too.

Exactly after two years, Rajinikanth fans will be able to feast their eyes on his highly talked about film Annaatthe. Directed by Siruthai Siva, the family entertainer set in the rural backdrop will feature Nayanthara and Keerthy Suresh as the female leads. Notably, the film will mark Rajini's first Diwali release in the last two decades. Backed by Sun Pictures, the rural drama will have the actor playing the role of a village head. Kushboo, Meena Sagar, Jagapathi Babu are the supporting cast of Annaatthe.

Arun Vijay's long-delayed film Vaa Deal will finally see the light of day on Diwali this year. Written and helmed by Rathina Shiva, the film has Karthika Nair in a key role. Announced in 2012, the movie was delayed reportedly owing to financial issues. Vaa Deal boasts of an ensemble cast including Vamsi Krishna, Kalyan, Suja Varunee, Sathish and Jayaprakash.

The high-voltage multi-starrer will be clashing with Annaatthe in theatres. The Vishal-Arya-led action thriller is directed by Anand Shankar and backed by Vinod Kumar under the banner Mini Studios. Starring Mrinalini Ravi, Mamta Mohandas and Prakash Raj in prominent roles, the film reportedly revolves around two friends who later turn foes. Though the actioner was expected to hit the marquee on October 14, the makers deferred the release date. Enemy's Telugu version will also release with the original.

Directed by Ponram, the rural drama is releasing on Disney+ Hotstar on November 4. The film revolves around a villager and his fight against a man who is on a mission to destroy a nearby mountain that can cause danger to the village. MGR Magan has M Sasikumar, Sathyaraj and Samuthirakani in the lead roles.

Last, but not least is Jai Bhim featuring none other than Suriya. The courtroom drama will be hitting Amazon Prime Video on November 2. The stalwart will be seen playing an intense role of an advocate who fights for the rights of the underprivileged. Written and directed by TJ Gnanavel, the film has Rajisha Vijayan, Prakash Raj and Rao Ramesh in important roles.