If you pick up Gautham Menon's best movies, his romantic flicks like Minnale, Vinnaithaandi Varuvaayaa and Vaaranam Aayiram would be ranked top, as the film connected well with youths. More importantly, emotions dealing with couples are best captured in his movies. Obviously, for his latest movie Neethane En Ponvasantham, audience have similar kind of expectations or expect something bigger than his earlier films. Well, has he recreated the magic again? Read on for the review...

Neethane En Ponvasantham is a soft-romantic tale starring Jeeva and Samantha. The film has a modern-day story, which we come across very often. The story of the film is all about the young couple played by Jeeva (Varun) and Samantha (Nithya). Varun and Nithya like each other since their childhood days. Interestingly, they fall for each other and part ways several times. They get separated for silly reasons but they cannot stay away, as both love madly at the bottom of their hearts. Their fights, ego clashes and emotions form the crux of the story. Like other romantic films, audience cannot expect twists and turns in this film but the film keeps you engaged throughout. Like Vinnaithaandi Varuvaayaa and Vaaranam Aayiram, the film runs in a slow pace and at parts it is boring. 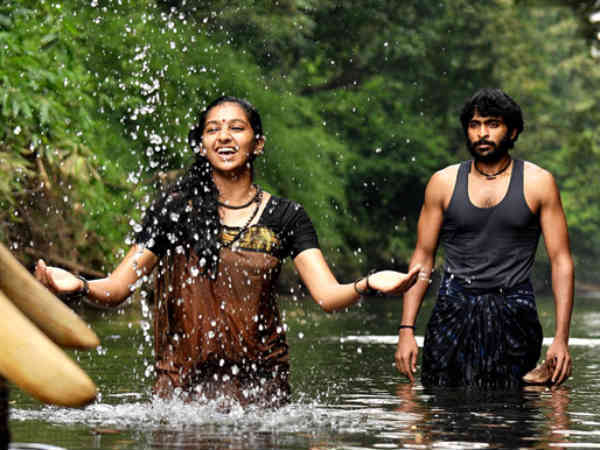 Gautham Menon's perfection for technical aspects could be seen in every frame. Eye-pleasing picturisation, ear-pleasing songs and beautiful locations make it a colourful film. The director reminds us of his earlier film Vinnaithaandi Varuvaayaa. However, the subject of Neethane En Ponvasantham is completely different from the Simbu and Trisha's film. The only similarity between the two film is that both the films are urban-centric targeting youths. Even in characterisation, Gautham has tried to keep the lead stars natural, and Jeeva and Samantha look apt in the lead roles.

Continue reading the review on slides below...

Jeeva looks cute and is hunky dory. His acting is best and has done wonderful role of a lover boy. He is ably matched by Samantha, who steals the show throughout the film. The actress has given her best till date and their chemistry works big time in Neethane En Ponvasantham. And there is Santhanam to break the funny bones of the audience.

Ilaiyaraaja's music is excellent and it is one of the best albums in the recent years. 'Yennodu vaa va..', 'Saayndhu saayndhu...' are of top quality. His background score perfectly suits the mood of scenes.

Ms Prabhu's cinematography is illuminating and every frame in the film looks beautiful. But long shots for emotional scenes remain drawback of the film.

Editor Anthony could not have shown mercy towards some scenes at parts, as the film has few boring moments. The slow narration will be the biggest drawback of Neethane En Ponvasantham.

Finally, Gautham Menon has come up with yet another beautiful romantic film. The technicalities and the performance of the lead stars are the highlights of the film. The film is not about the story but about emotions involved between the couple.

Verdict: The film is youthful and lovely.