Jyothika is back on the big screen through 36 Vayadhinile(36 Vayathinile) to entertain one and all. But her comeback movie might not target entertainment alone, why? Continue to read our review.

Jyothika's husband, played by Rahman, decides to move to Ireland along with his family for their own betterment. Unfortunately, Jyothika is denied visa from an Irish firm as she has just turned 36.

Rest of the film deals with the same concept as to what a 36 year old Indian woman goes through in her day to day life, from realizing that she has sacrificed everything for her family to being considered less important by her teenage daughter.

In a cinematic twist, Jyothika gets a chance to meet the Indian President. She suddenly becomes the centre of attraction, in a wrong way, as she faints right in front of the President and becomes a laughing stock wherever she goes, which includes almost all social media networks.

Considering this as an embarrassment and an opportunity to fly to Ireland, Rahman along with his daughter moves to the foreign nation as planned earlier, leaving Jyothika behind.

What forms the crux of this story is how Jyothika decides to chase her dreams, inspired by her friend, played by Abhirami, as she finally gives herself a chance to be what she has always dreamt of being.

As expected, Jyothika literally carries the entire film on her shoulders, brilliantly portraying an average middle aged woman. She will make you laugh and cry with her expressions alone.

Rahman and other other supporting cast have done justice to their respective roles. While Siddharth Basu makes you believe that he is the actual President of India, Abhirami's characterization is not as convincing as it should've been, one might feel.

What stands out in the entire movie is Viji's dialogues, for it is laced with humour even while conveying a serious message. Both message and the humour hits you hard and makes the entire film believable.

While the screenplay is almost perfect in the first half, it gets a bit too hasty in the second half giving us the impression that the director wants to finish the movie quickly.

Cinematography by R Diwakaran is neat as he has not attempted anything extravagant. Editor Mahesh Narayanan has made an honest attempt with a run time of 1 hour and 55 minutes which is refreshing.

Background score by Santhosh Narayanan adds stability and strength as it helps the movie in conveying its message.

Overall, 36 Vayadhinile is a perfect comeback film for Jyothika as it entertains and gifts you a valuable message that can be carried along from theatre to home.

Check out the slides below for some of the best scenes and a few interesting trivia about the movie: 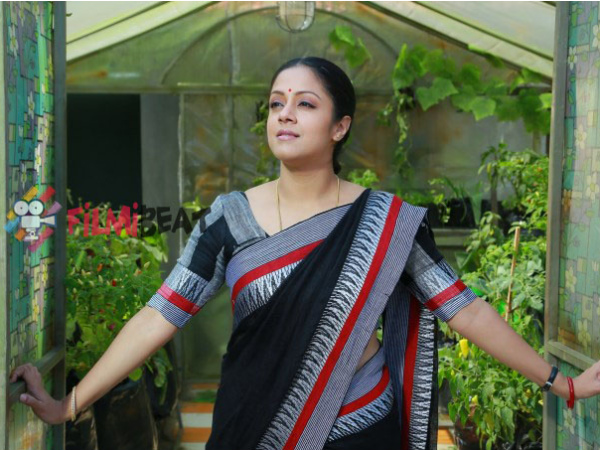 In August 2014, it was announced that actress Jyothika would make a comeback to acting after a eight-year sabbatical by featuring in the Tamil remake of Rosshan Andrrews's Malayalam film How Old Are You.

On Her Way To Realize Her Dream

Suriya agreed to produce the venture under his production banner 2D Entertainment, while director and writer Rosshan Andrrews and Bobby Sanjay were retained from the original version.

Jyothika And Her Subtle Expressions

Suriya revealed that Jyothika and he were impressed by the Malayalam version and Jyothika took two days to agree to make a return as an actress.

Actor Rahman was added to the cast in October 2014, to play the role originally essayed by Kunchacko Boban. Music director Santhosh Narayanan was signed on to compose the film's score and soundtrack.

The shoot of the film began in November 2014 and shoots were planned to take place in Chennai, Delhi and Rajasthan. The final scene of the film was first shot, with scenes of Jyothika's character meeting the President, played by Siddharth Basu, at Rashtrapati Bhavan filmed in New Delhi.

The Humour Side Of The Actress

Apart from her amazing expressions Jyothika has impressed one and all with her subtle humour, powered by Viji's outstanding dialogues.

Jyothika's Dilemma In The Movie

During the first schedule, actress Abhirami also signed on to portray a pivotal role, marking a comeback to Tamil films after an eleven-year absence.

On Her Way To The Office

Sanjay Bharathi was also offered a small role in the film by producer Suriya, who had been working with him in another production, Masss

Life In A Bus

The scenes that involves Jyothika's bus journeys forms an important part in the entire film.

The Queen Of Expressions Is Back

36 Vayadhinile is truly a treat to all Jyothika fans who have been patiently waiting for her comeback. And she is back with a bang.