Demonte Colony movie review or should we say the movie in itself, has been awaited by many as the film was touted to be a complete horror flick as opposed to many recently released films which had embraced horror-comedy as its genre. Check out what Demonte Colony has to offer by reading our review.

Four friends Srinivasan(Arulnithi), Raghavan, Vimal and Sajith decide to unravel the mystery behind De Monte Colony, a well known area in Chennai, which is believed to be haunted for ages now.

They visit a haunted house and bring back a chain from the place they visit. What are the consequences faced by them for provoking a possible dark spirit? What happens when Srinivasan is possessed, is said in an intriguing fashion.

Arulnithi emotes well with his fear invoking expressions but his dialogue delivery needs to be taken care of, one might feel.

All the other supporting actors have delivered especially Ramesh Thilak of Soodhu Kavvum fame who looks like a natural actor.

It's a bold move by the director to go ahead with the film sans a female lead which has actually worked in favour of the movie.

Demonte Colony is technically strong. The amazing cinematography of Aravind Singh who uses unique angles and almost aces the technique of shooting a horror flick(usage of lights) is something to watch out for.

Other positive in the technical aspect is Keba's background score. Though being his debut movie as a music director, his re-recording and understanding of what needs to be done for a horror flick in too good.

The movie takes some time to settle down in the first half but gets engaging as it approaches the interval block. Second half comes out as a winner with enough horror elements to keep you spooked throughout.

With a run time of less than 2 hours, editor has done a decent job in dishing out a neat thriller. Ajay Gnanamuthu's(director) writing also stands out as he has gone ahead with a no nonsense approach.

Kudos to the director for choosing a horror subject in his debut movie and delivering it in the best way possible. Demonte Colony is not for the weak-hearted. 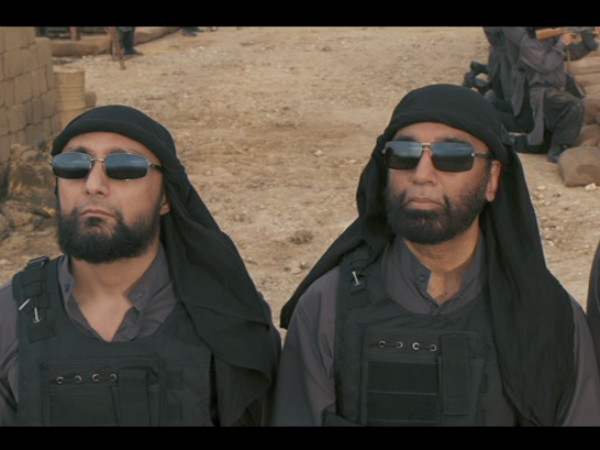 Kamal Haasan's Vishwaroopam Gets A Thumbs Up From A Terrorist Organization!

For some of the best scenes from the movie, check out the slides below:

Debutant director Ajay Gnanamuthu, who is a former assistant of AR Murgadoss scores in a big way through Demonte Colony. His next project will now be awaited with keen interest.

'Jangiri' Madhumitha has played the only female role in the movie. Though her character looks forcefully inserted, director's brave attempt to come up with a script that doesn't have room for a female lead is appreciable.

After getting drunk, four adventurous friends decide to explore a haunted house in the forbidden area, De Monte colony. What follows next will definitely spook you out.

The director has come up with sufficient horror moments that will frighten you throughout. Don't dare to watch this one if you can be frightened easily.

Arulnithi has only a handful of films under his kitty. But his amazing ability to choose his scripts has been appreciated by many. Demonte Colony is definitely a well-scripted film.

Arulnithi's expressions are appreciable. The supporting cast gets equal screen space and they all have delivered.

The scene where the group of friends realize about their 'unfortunate' last night is shot well. How a drunkard's thinking can sometimes invite trouble has been highlighted well.

As mentioned earlier cameraman's contribution, especially in the scenes which has been shot during the night time, is immense.

Unlike other Tamil horror films, which tends to keep the horror level down, Demonte Colony has gone the conventional way and manages to scare you to the fullest.

Now Arulnithi's next script selection will be looked at with keen interest by movie buffs. Can he come up with something even better than Demonte Colony? Stay tuned to know.