Inji Iduppazhagi, starring Anushka and Arya in the lead, had created decent buzz prior to its release, thanks to Anushka's awesome dedication. But has the film done justice to her commitment? Continue reading our movie review to know.

The film is basically about a fat girl, who puts her parents in distress as they often fail to find her a suitable bridegroom. Obviously, the problem here is her overweight.

Inji Iduppazhagi also showcases the day-to-day life issues faced by an obese girl and that's about it. The film then narrates the efforts taken by her to lose weight, and that comes with a social message.

As expected, Anushka is the scene-stealer in this flick. The entire movie revolves around her and the Baahubali actress has done complete justice to her role. Her performance is one of the major highlights of this movie.

Other notable performances comes from Prakash Raj, who plays a gym owner, and Urvashi (Anushka's mother). Urvashi has yet again flaunted her talent quite convincingly.

As this movie is all about Anushka, Arya gets little opportunity to display his acting prowess. Having said that, he has done his job neatly.

Though the first half is enjoyable to an extent, the latter half gets way too draggy for one's liking. With stretched climax and a couple of unnecessary songs, Inji Iduppazhagi does test your patience at times. Not to mention few comedy sequences that fail to evoke laughter.

What does not work out in Inji Iduppazhagi is its writing, for a wafer thin storyline is stretched beyond its limit, making the film look boring at times.

Also, for a 'bilingual' the lip sync is horribly out of order as one can easily make out that the film, at large, has been shot in Telugu.

Yes, the film has its issues, especially in the technical department, but Inji Iduppazhagi can be considered saved by Anushka's terrific performance and a relevant social message.

Check out the slides below to know what fans think about the movie, along with some interesting stills. 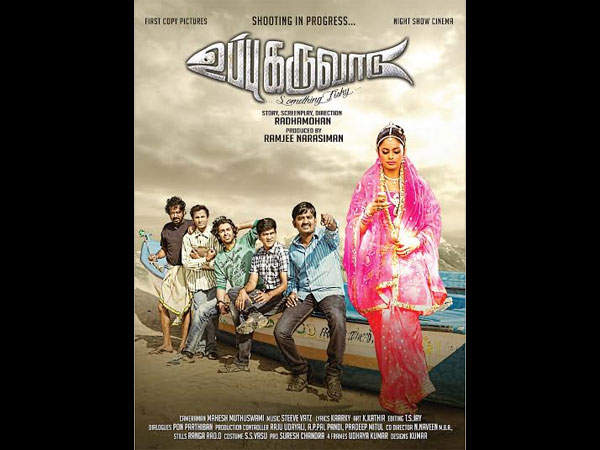 Sidhu wrote on his social networking page, "#InjiIduppazhagi: Big bright bother. Though it gets the message across, it doesn't work as an entertainer. Watchable, only for Anushka!."

Siva posted, "#injiiduppazhagi :Script is Complete woman's material. Size Zero technic spoils health is message. It's an anushka show through out. Script doesn't demand any technical brilliance hence technically nothing 2 rave. Except Anushka no scope 4 others".

Christopher Kanagaraj wrote on his Twitter page, "#Injiiduppazhagi Once watchable for Anushka's performance & the fitness message it conveys, Arya doesnt have much scope, telugu flavor songs."

Venkat Praveen went on to say that Inji Iduppazhagi is a must watch, he wrote, "#InjiIduppazhagi is a feel good family n comedy oriented film which throws nice message to obese people. Nice script n everybody must watch."

Nitin Chakravarthy said, "This is Anushka's career best performance #SizeZero Intermission. Though the proceedings move at a slow pace, Anushka's mesmerising performance & the sublime humour made it entertaining.. #SizeZero".

Looks like Hari Kiran enjoyed the film's first half. He posted, "Halfway through #SizeZero. Very Entertaining til now. Dialogues are a major plus. Sweety #Anushka 's one of the career best performances".

Sangeetha Devi emphasized on the fact that the film showcases variety of food, she wrote, "Mid way through #SizeZero, feel like I've gorged on boxes of laddus & jalebis already. So much food on screen".