Dhanush's Maari has finally hit the screens amidst tremendous support by fans. Though there were issues in playing the premiere shows in some of the foreign countries, the KDM keys were subsequently delivered on time and the film came alive in the said time here in Tamil Nadu. Continue to read our movie review to know exactly what the film has to offer.

Maari, played by Dhanush, grows up in a slum located in Chennai. He develops a keen interest in pigeons and starts rearing them out of pure passion.

As he grows up, he understands that winning in a pigeon race can earn him a fortune and decides to focus his attention completely towards pigeon race and almost gets addicted to it.

A brawl within the world of pigeon racing can get ugly. One such clash involving Dhanush leads to a series of events which sets a wheel in motion, making Dhanush a small time don.

When he begins to rule his area, everything seems to be on track for the hero until Arjun Kumar, a police officer, played by Vijay Yesudas decides to put an end to Maari's dream run.

How does Maari handle an intellectual police officer forms the remaining part of the story which is told with a heavy dose of comedy and action sequences.

Maari the movie is character driven and hence Dhanush is expected to carry the entire movie, which he does. His body language, slang and dialogue deliveries are a class apart.

Kajal Aggarwal shines in whichever scene she appears, which is very limited. Vijay Yesudas the debutant is a disappointment as his emotions and expressions are way too minuscule, even for a policeman.

Apart from Dhanush, other major performance comes from the film's main comedian Robo Shankar. If his dialogues are funny enough to make you grin from ear to ear, the way in which he delivers them will leave you in splits. Surely, he is one of the positives in Maari.

Screenplay by Balaji Mohan will hardly make you glance at your watch. Second half though could've been a touch pacier. But the true problem lies in his weak writing. Maari is definitely the weakest subject in Dhanush's career in the recent past.

Cinematographer Om Prakash has managed to use the colors required to elevate the overall feel of the movie. The angles used also suit the mood of a film like Maari.

Anirudh Ravichander's background score is getting better with each film of his. The young lad has quickly learnt how to use different forms of music to different films.

Loaded with scenes that will make any Dhanush fan happy, Maari is strictly for Dhanush fans. Disappointment sets in when we realize that Dhanush has begun to choose ordinary scripts to perhaps satisfy his fans.

Check out the slides below for some of the best scenes along with interesting information about the film: 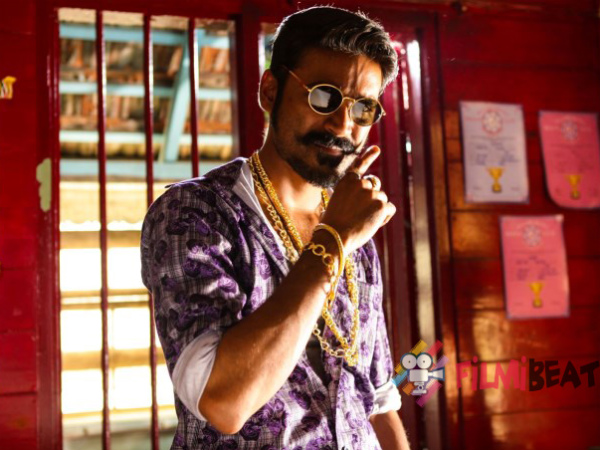 Back To 'Mass' Themes

With Maari, Dhanush is back to portray the characteristics of a 'mass' hero. For Balaji Mohan too, this is the first film in which he is trying a 'mass' theme.

Dhanush As A Cocky Gangster

Dhanush has played a role which other heroes might hesitate to try. After all, it is not easy for a hero to pull off a role which is designed to irritate others including kids.

Kajal plays Dhanush's heroine for the first time after she missed out on Polladhavan. Their on-screen chemistry is sparkling indeed.

Dhanush's role as a local rowdy will impress one and all as he has managed to emulate a person who well and truly belongs to the slums.

Maari marks Vijay Yesudas' debut as an actor. He has portrayed the character of a stern police officer in the film.

A set was erected at Valasaravakkam in Chennai where a 20 day schedule took place without a break. The schedule included a fight and song sequence.

Songs and background score by Anirudh is another plus point in the film. Dhanush and Anirudh popularly known as the 'DNA' team have delivered once again.

Dhanush's characterization has been designed keeping his fans in mind and why not? He is a star who is in a different league now and it is only fair from the director's point of view that his fans should be presented with a film like Maari.

The official photography of the film began on November 4th 2014. The film was majorly shot in Chennai and some of the scenes were filmed in Thoothukudi.

Massive Response For The Trailer

Apart from Dhanush and Kajal joining hands for the first time, another first time factor includes the collaboration between Dhanush and the film's director Balaji Mohan.

The soundtrack of Maari was released on 7th of June 2015. The album claimed the numero uno position in iTunes India as soon as it was made available.

The satellite rights of the film is bagged by Sun TV. It is to be noted that even Anegan was purchased by the same channel.

Since the movie is loaded with smoking scenes in slow motion, many are now questioning the CBFC's decision of providing Maari with a clean 'U' certificate. The film is also enjoying the benefits of tax exemption.

The movie's heroine Kajal has very few scenes to prove her mettle. Like any clichéd Tamil cinema she has been used only for romantic and song sequences.

Maari gets predictable in the end which is one of the weaknesses of this film. Balaji Mohan's first two films were thoughtful and innovative but Maari is all about mass sans class.

The Story Of A Don

Maari is all about a small time don. The film is made with the sole intention of entertaining the masses.

With Maari getting mixed reviews from fans and critics, it is difficult to gauge if Maari will go on to become a box office success. It will definitely have a tough competition from Baahubali even in Tamil Nadu.