Naanum Rowdydhaan starring Vijay Sethupathi and Nayantara had ample pre-release buzz, thanks to the popularity of its lead pair. So has the film lived up to all its expectations? Continue reading our movie review to know.

Vijay Sethupathi's only ambition is to become a rowdy which contradicts with his mother's (Raadhika) dream of making him a police officer.

He manages to become a self-made ruffian and that's when he meets Nayantara who comes seeking his help, only to realize that he is not an actual rowdy but a fake.

When Vijay falls in love with her, he learns that her only aim is to eradicate Parthiepan. What is the reason behind her rage? Can Nayantara and Vijay Sethupathi kill a fierce person like Parthiepan? These questions are answered in the film which forms the crux of this plot.

Nayantara as a deaf girl has excelled in each and every scene. Though it is one of the positives of this flick, that is also one of the negatives as she has completely overpowered Vijay Sethupathi all the way through.

The actual problem here is Naanum Rowdydhaan gives us the feeling that its director Vignesh Shivan might've completely forgotten about the factor called 'on-screen chemistry' between the lead pair.

Parthiepan is the real strength of this movie in the performance department. His witty one-liners have worked like a spell as it makes you laugh genuinely, unlike other comical portions involving Rajendran and RJ Balaji.

Anandaraj deserves a mention as well as the veteran has delivered the goods in the limited screen space that he has been allotted.

While bad on-screen chemistry (which looks extremely artificial) between the lead pair spoils the first half, slow screenplay disfigures the second which is largely saved by Parthiepan alone.

George C Williams' cinematography and Sreekar Prasad's editing are top notch and are some of the biggest positives of Naanum Rowdydhaan along with Anirudh's brilliant and apt background score.

Songs too have been placed well which is refreshing to see in a Tamil movie. Predominantly, this movie is technically strong. Vignesh Shivan's directorial skills deserves a special mention, for the filmmaker has a knack of fabricating an enjoyable film out of an ordinary story.

Naanum Rowdydhaan has its moments. Though the movie blows hot and cold throughout, its fun filled climax and pre-climax portions will make you forget all its blemishes.

Check out the slides below for some of the interesting stills and information pertaining to the movie: 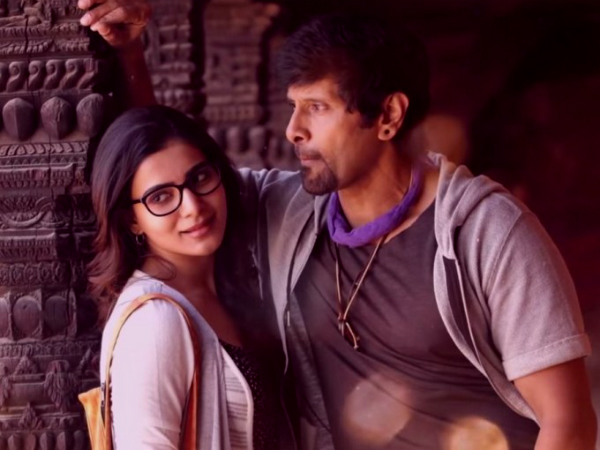 Naanum Rowdydhaan has been produced by actor Dhanush under his home banner Wunderbar Films. The movie is distributed by Lyca Productions.

The movie was largely shot at Puducherry and Chennai over 75 days.

Vijay Sethupathi In Place Of Anirudh?

There were reports claiming that Anirudh was initially roped in to play the lead role along with Samantha.

Initially reports had it that director Gautham Menon would be producing this flick with Gautham Karthik & Lavanya Tripathi in the lead roles.

The team began shooting in December 2014 in Puducherry. The shoot went on for 60 days.

RJ Balaji joined the team during the first schedule where they were shooting at a temple near Villianur, 9 kilometres away from Pondicherry.

Vijay Sethupathi had to lose weight for this particular role and hence followed an extensive diet regime prior to the commencement of the project.

The film's album has 6 tracks all of which were composed by Anirudh. Except 'Neeyum Nannum', which was written by Thamarai, all the other songs were penned by Vignesh Shivan.

It is predicted that Naanum Rowdydhaan will perform better than Vikram's 10 Endrathukulla over the 5 day weekend.