Suriya's Pasanga 2, prior to its release, was expected to teach and entertain audiences of all ages. Has the movie achieved what it initially set out for? Continue reading our movie review to know what exactly Pasanga 2 has to offer you.

When making a film involving kids, the best you can do is to cut open the cute little world of children in order to expose their needs and dreams, which are different from that of the grown-ups.

Pandiraj, a director who is accustomed to making similar movies, comes up with yet another brilliant flick, which deals with Attention Deficit Hyperactive Disorder (ADHD) among kids and the world of their own.

Interestingly, Pasanga 2 demands the attention of parents more than kids, as the movie teaches how to raise today's children.

Revolving around the lives of two couples and their respective children, Pasanga 2 is all about their goals, disappointment, dreams and contentment.

While all the kids are at their usual best (children are natural performers), Karthik Kumar, Ramdoss and Vidya Pradeep add solidity to the film, by coming up with credible preformances as anxious parents. Bindu Madhavi, as a young mother, fails to impress.

Suriya, in an extended cameo, impresses with his dialogue delivery and body language. His presence certainly adds value to the film. All other supporting actors, including Amala Paul have done their respective roles quite efficiently.

Pasanga 2 is technically solid as well. Slick visuals captured by cinematographer Balasubramaniem and apt background score by Arrol Corelli are some of the highlights of this film.

But what really stands out throughout is director Pandiraj's thought provoking and sharp dialogues. It is only fair to deduce that dialogues deserve a lion's share in whatever success this movie manages to achieve.

While screenplay in the first half is fun and engrossing, the latter half gets a tad slower as messages accompanied by data takes centre stage.

Though Pasanga 2 has its issues which includes clichéd characters and sequences, it joins the list of must-watch flicks for children and their parents. 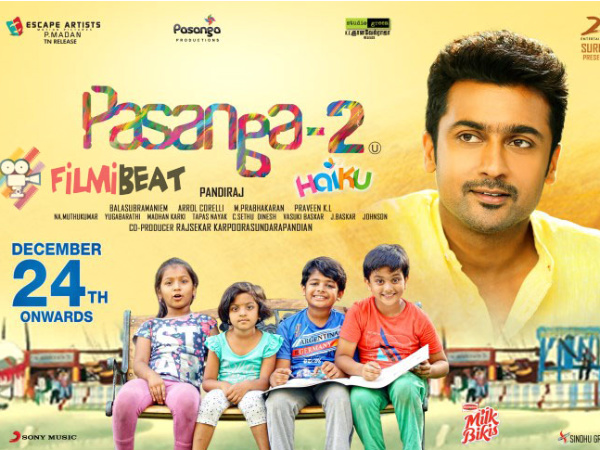