The release of Romeo Juliet has been awaited by movie buffs for quite sometime now, now that the Jayam Ravi-Hansika starrer has hit the silver screen, what does the movie actually has to offer? Check out our review to know.

The plot of this movie can be termed as old wine in new bottle as it doesn't offer anything new. Sample this; Romeo chases Juliet, Juliet falls in love with Romeo, Juliet breaks up with Romeo and how they get back together forms the remainder of this story.

But what works in Romeo Juliet is its entertainment quotient as the director somehow manages to keep us engaged for most parts if not throughout.

As the name suggests, this movie revolves around its lead characters and hence demands some decent performances from them.

Both Jayam Ravi and Hansika have delivered and as a pair, they look as real as it can get. Hansika impresses with her cute expressions and almost steals the entire first half. Her lip-sync sometimes, goes haywire though.

Vamsi Krishna's characterization has been portrayed well throughout and the main antagonist has done justice to his character.

With a wafer thin story line, Romeo Juliet would've fallen absolutely flat had its technical aspects failed. But fortunately, the movie largely gets saved because of its technicalities.

Imman scores big as the songs have played a major role in making Romeo Juliet enjoyable. His background score too is subtle and elevates certain scenes, without even being noticed.

Adding value to the songs and other scenes is Soundar Rajan's camera work. The pictures looks sleek and a rich texture enhances the overall feel of the movie. The cinematographer sure knows how to picturize a light-hearted rom-com.

While the first half is engaging, second half gets draggy at few places before the climax makes you forget about the negativities as the film approaches a feel good finish.

Dialogues are clichéd, director Lakshman must focus on his dialogues and writing in his future endeavours, one might feel as they exit the cinema hall.

Though Romeo Juliet is an average rom-com, it succeeds in portraying the new age romance. What also saves this movie is that it manages to entertain and at the end of the day, entertainment matters.

Check out the slides below for some of the best scenes from the movie: 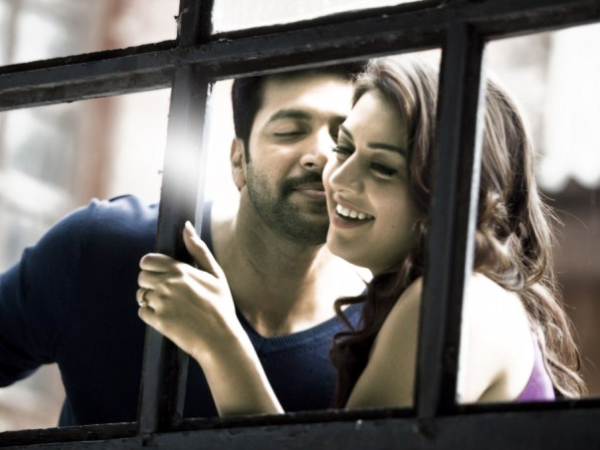 Hansika has managed to impress one and all with her cute expressions. It is indeed refreshing to see a heroine having so much of screen space along with the hero.

Director Lakshman has brought in a third character(only briefly) in an attempt to give a twist to the plot. While it works largely, it also makes the movie a touch predictable.

Not The Typical Romeo Juliet

Jayam Ravi has been characterized as an old school guy while Hansika gets to play a uber cool modern girl. The attempt to showcase the influence of westernized thoughts is praiseworthy.

The on-screen chemistry between Jayam Ravi and Hansika has worked like a charm in Romeo Juliet. Definitely, one of its strengths.

Poonam Bajwa's role is very limited, you can even call it a cameo. But the Thenavattu girl has done complete justice to her role.

The comedy portions have worked well in Romeo Juliet. In fact, it is because of its comic sequences, the movie manages to entertain its audience.

The film's first official poster released on 14 April 2014 coinciding with Tamil New Years Day. The team held their first schedule in May 2014, with Poonam Bajwa joining the cast.

While most of today's youth might enjoy the film, women might feel that the film showcases them in bad light, which is not a healthy sign.

Increasingly, many movies have begun to display bigger stars from their own respective movies. Romeo Juliet begins with Ilayathalapathy Vijay's Kadhalukku Mariyadhai.

The film successfully captures new age romance which works in its favour.