Thani Oruvan had its world premiere last night and the movie is releasing today here in India. So what does this psychological thriller has to offer? Continue reading our movie review to know.

The movie deals with a basic concept of good vs evil which has been narrated in a unique style. Jayam Ravi plays an upright IPS officer whose priority is to safeguard the serenity of his town.

On the other hand Arvind Swamy has played the baddie who deceives others with his charming looks, subsequently making them fall into his trap.

A game of cat and mouse ensues between Jayam Ravi and Arvind Swamy after the latter's menace reaches an unbearable height. But this battle is more of a psychological clash which makes this film quite interesting.

All the lead actors including Mugdha Godse have delivered the goods. Arvind Swamy's body language is something that you may find interesting throughout the film and his dialogue delivery is an added advantage.

Special mention goes to Nayantara, for she deserves it. The talented actress has yet again proved her worth with her subtle and clever expressions.

Supporting cast of Ganesh Venkatraman, Harish Uthaman and Sricharan have played their respective part in an efficient manner while Vamsi Krishna looks way too rigid for one's liking.

Kudos to the director for assembling a near perfect cast with Thambi Ramaiah being the only exception as his role is a slight mismatch in a movie like Thani Oruvan.

Thani Oruvan is a technically strong film. Intriguing screenplay backed by engaging background score forms a lethal combination. Both first as well as second halves are fresh and manages to keep you hooked.

Ramji's cinematography adds stability and also enhances the overall feel of the film. Colors too have been used brilliantly as the team has managed to give us a feeling that they sure know where to draw the line in order to make the pictures look sleek and truly international.

While Gopikrishna's cuts are sharp enough, he could've perhaps shortened the overall length of the film as 2 hours and 38 minutes is slightly on the longer side for a thriller.

Thani Oruvan is a classified thriller which is new to Tamil cinema. The whole team deserves a pat on their back for pulling off a new age cinema while keeping all the commercial elements intact.

Check out the slides below to know more about Thani Oruvan with interesting stills: 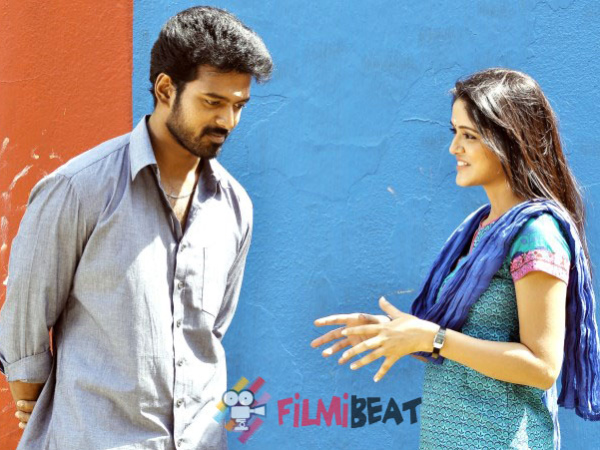 Director Raja in one of his interviews had revealed that Jayam Ravi's character in Thani Oruvan was designed after he was inspired by one of his real life friend.

Jayam Ravi turned toward his friends working in the police department and also underwent special training involving weapons to get the nuances of his character right, according to a report.

Principle shooting began in late 2013 at Binny Mills in Chennai where some romantic sequences involving the lead pair was canned.

It was earlier speculated that the team of Thani Oruvan are keen on roping in either Arya or Arvind Swamy to play the film's lead antagonist. Later it was officially confirmed that the role was bagged by the Bombay actor.

The veteran actor who is very selective about his roles has delivered a powerful yet stylish performance. Jayam Ravi had admitted that it was difficult matching up to his standards on the sets.

The chassy actress has been given a role of depth and she has once again shone throughout the film. It was earlier said that Jayam Ravi admired her work while shooting for the film.

Mugdha Godse of Fashion fame has made her Tamil debut through Thani Oruvan and has played the role of an international model.

Aadhi has scored a peppy background music and his songs have added value to this flick. The young musician looks promising and has a long way to go in Kollywood.

This is M Raja's original script (Velayudham was inspired by Telugu film Azad) and the director scores big in his first attempt of penning a story.

Before the release of the movie, M Raja had revealed that Thani Oruvan is an experimental script as the way this film has been narrated is new to Tamil audience.

Almost all dialogues have worked like a charm in this film. It is jointly written by M Raja and Subha, according to a report.

Thani Oruvan is the biggest release for Jayam Ravi as far as the number of screen count is concerned. The movie had its world premiere in Dubai and has released in the USA at many locations.

AGS Entertainment is known for producing quality films and Thani Oruvan is definitely one such cinema the production unit can be proud of.

Going by the reviews Thani Oruvan has managed to garner so far, it should eventually taste success at the box office. Stay tuned for official numbers.