Madhavan makes a comeback of sorts to Tamil cinema with his latest release Irudhi Suttru. But the question is, is he back with a bang? That's precisely what you will be finding here in our Irudhi Suttru movie review.

Madhavan is a banished boxing coach who tries hard to prove his critics a point. Carrying with him a hope that our country too, can achieve big in the field of boxing, he begins a new journey.

Check out what fans have to say about Irudhi Suttru in the slides below:

Vignesh Babu posted, "#‎IrudhiSuttru‬ A Top Notch Definitely Not To Be Missed.. !.. Everything Comes in Positive Category & It leaves Nothing in Negative Category !.. ‪#‎Awesome‬

Karthik Rangarajan said, "#‎IrudhiSuttru‬ is a very good entertainer. Director, Lead actress are a great find. Madhavan's first movie in 5 years or so and its goddamn good. I liked it."

Vignesh Babu further went on to say, "@dhananjayang Bro I Would like to Say that This is Your BEST of the Recent Times !..
Huge Applause & My Whole Hearted Wishes 😊 #IrudhiSuttru."

Shiva‏ posted on his Twitter page, "Positive reviews for #IrudhiSuttru especially @ritika_offl and her lip sink with the tamil is the hot news now !! Best wishes to the team :)"

Narayanan feels that the second half could've been better, he said, "#IrudhiSuttru - Well made boxer- coach emotional relationship film with gripping climax. 2nd half could hve been better. Enjoyable."

Meyyappan posted, "#IrudhiSuttru loved all the songs, which doesn't comes as a speed beaker. Choreographed well. Each and every department did their job well."

Impressed with the attitude of a young fisherwoman, played by Ritika Singh, Madhavan decides to make her his disciple by coaching and paying her 500 rupees, per day.

The rest of the film narrates the journey of these two distinctive characters and of course, whether Madhavan realizes his dream is something you have to check out in a cinema hall.

Yes, Madhavan the actor, is definitely back with a bang. Kudos to the Anbe Sivam actor for taking up an unconventional role and delivering it like a champ.

Newcomer Ritika Singh, a real life kick-boxer, is a good find. However, it is to be seen if the girl is here to stay when she signs a film sans boxing. In Irudhi Suttru though, she packs a punch.

Supporting actors like Nassar and Radha Ravi add solidity to the film. Kaali Venkat too, deserves a mention, for he provides comic relief while coming up with a believable performance.

Sudha Kongara Prasad, who made her Tamil debut back in 2010 through Drohi, hits the bull's-eye with this sports based drama.

Though the second half might make you feel as though the screenplay is rushed somewhat, the first half is an absolute delight. Climax provides the icing on the cake, which makes the blemish in the second half ignorable.

Thanks to Sivakumar Vijayan's cinematography, the visuals look slick. The usage of his colours too, deserves a mention.

Sathish Suriya's editing keeps the film crisp, staying true to its genre. One might feel he could've used his virtual scissors more in the latter half of Irudhi Suttru.

Santhosh Narayanan impresses with re-recording. His songs though sounds repetitive. Looks like the most happening musician is finding it hard to give up on some of his favourite tunes. Having said that, his BGM tickles your ear-drums, in a good way.

Irudhi Suttru is fun and emotional (sans over the top scenes). It is riveting and also manages to take a dig at women's boxing in India. 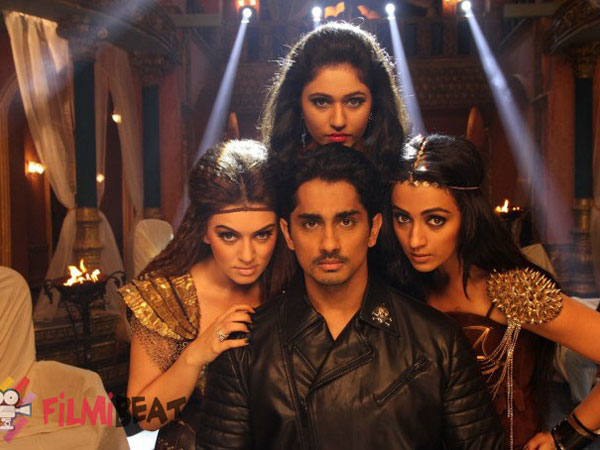 Aranmanai 2 Movie Review & Rating: A Mash-up Of All Horror-Comedies!