The highly awaited devotional comedy-drama Mookuthi Amman has released on Disney+ Hotstar today (November 14, 2020), on the special occasion of Diwali. The film helmed by RJ Balaji and NJ Saravanan features Nayanathara in the lead role.

Did the Nayanthara-starrer succeed in impressing the audiences? Read on to know...

Mookuthi Amman revolves around Engels Ramasamy (RJ Balaji), a reporter who belongs to a middle-class family, that consists of his mother (Urvashi) and three sisters. As they struggle to make ends meet, their family deity Mookuthi Amman (Nayanthara) enters their life to change them and the world around them forever.

The story written by RJ Balaji is simple, impressive and quite relatable. Take any sequence from the film and you will be able to relate to it instantly. The writer has indeed done thorough research on the subject which is quite evident. RJ Balaji along with NJ Sarvanan has also maintained an out-and-out balance between humour and the harsh reality of life which needs special applause.

The impeccable storyline, well-executed narration and the commendable cast are the factors that helped the film succeed in keeping the audience engaged throughout.

RJ Balaji as Ramasamy is quite relatable. His balanced emotions, gestures and dialogues are impressive and have truly helped him get into the skin of his character.

Nayanthara as Mookuthi Amman looks divine and does complete justice to her character. The diva's dialogues and combination scenes with RJ Balaji are unmissable.

Urvashi as Ramasamy's mother has undoubtedly done a great job. Her effortless acting chops and one-liners are a treat to the eyes and the ears. She essays the role of a single mother who is ambitious about her children's future.

Cinematographer Dinesh Krishnan has captured the breathtaking Nagercoil beautifully and deserves applause for the visual treatment that blends with the storyline. A vibrant colour pattern has been used throughout the film. On the other hand, the music composed by Girishh G works well with the narrative.

Mookuthi Amman is a well-knit film you wouldn't want to miss this Diwali. The impeccable storyline instilled with funny moments, well-executed narration and the commendable cast is what makes the light-hearted devotional film engaging and superlative. 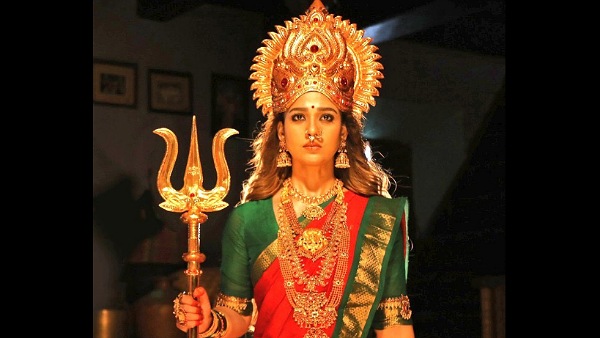