Saani Kaayidham, the much-awaited project that features Keerthi Suresh and Selvaraghavan in the lead roles, has been released on Amazon Prime Video. The project, which is directed by Arun Matheswaran, is a revenge drama that is set in the backdrop of rural Tamil Nadu. Saani Kaayidham, scripted by director Arun himself, is bankrolled by Siddharth Ravipati.

Ponni, a policewoman (Keerthy Suresh) seeks vengeance for the sexual violence she faced and the brutal murders of her husband Mari (Kanna Ravi) and little daughter Dhana - both done by a group of upper-caste men. Sangaiyya (Selvaraghavan), Ponni's half-brother with whom she shares a bitter past, is her only source of support in this journey.

Saani Kaayidham Twitter Review: Is The Keerthy Suresh A Hit Or A Dud?

Arun Matheswaran, who rose to fame with Rocky, is back to his signature style of filmmaking with Saani Kaayidham. The movie opens with a black and white scene that gives a hint of what is in store for the audience. Saani Kaayidham unfolds as chapters through an impressively-made non-linear narrative. The film deals with the deep-rooted caste discrimination in our society with absolute conviction.

With the effective making, the wafer-thin storyline is developed into a gut-wrenching piece of cinema. We get a protagonist who never takes pride in her police uniform and only considers it as a source of income. Ponni's journey from a wife and mother who wants to solely focus on her family, to someone who is unbelievably violent and is on a killing spree is told sincerely. But both her character and her journey fail to connect emotionally - which makes it difficult to root for her.

When it comes to its second protagonist - Sangaiyya is an innocent man who is introduced in the company of children. There is a certain endearing quality in him until he chooses to join hands with Ponni on her journey of vengeance. But sadly, even this character, which serves the purpose of an emotional trigger at various points in the narrative, fails to move us. The antagonists also lack a character arc and are strictly monotonous. This lack of emotional connection, along with the mind-numbing violence makes it tough for the audience to feel any kind of adrenaline rush even in the final act of Saani Kaayidham. 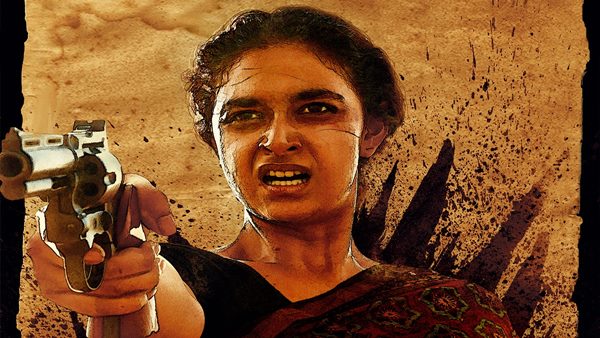 Keerthy Suresh once again proves that she is one of the finest acting talents of contemporary cinema, with her terrific performance as Ponni. The actress' performance in Saani Kaayidham is a prime example of her versatility and amazing range as an actress. Ponni is an extremely tough role to pull off, but Keerthy Suresh has done a brilliant job.

Selvaraghavan is simply fantastic as Sangayya, the character which originally marked his acting debut. The celebrated filmmaker has depicted the various shades of his character with absolute perfection and is unarguably the perfect choice for the role. Kanna Ravi has done a decent job as Maari, while the rest of the cast are good in their respective roles.

Yamini Yagnamurthy, the cinematographer deserves a great round of applause for the distinctive visuals of Saani Kaayidham, which makes it an extremely realistic movie experience. Nagooran Ramachandran's effective editing makes the non-linear narrative really impactful.

Sam CS, the popular musician has done a great job with the original score. The soul-stirring background score and the effective usage of silence in the narrative make the revenge drama an impactful watch.

Saani Kaayidham is a brutal, raw, and gut-wrenching film that makes a mark with the performances of its lead actors - Keerthy Suresh and Selvaraghavan. This Arun Matheswaran directorial is a deeply moving film, but it is definitely not for everyone.