In the latest episode, the Bigg Boss 11 contestants are seen playing the 'Mean' task, where a contestant who wins, would get a certain amount of money.

The task continued today, where Vikas destroyed Akash's shoes by dipping them in a paint can and also pours green slime/paint on him. Shilpa destroyed Hina Khan's Sher Khan cup!

Post the task, Vikas is seen taking Hina's side. Hina collects the pieces and keeps them on her table. Both Hina and Vikas taunt Shilpa. While Hina was seen crying, Shilpa tells Puneesh that she is not at all feeling bad after doing the task.

Vikas gets another chance to prove he is the ‘meanest' as he decides to wax Puneesh's legs. Bigg Boss declares Vikas as the ‘meanest' contestant (as his picture was seen last on the board). But, the amount that Vikas won was not shown!

Post the task, Arshi is asked to leave the house. Arshi bids goodbye to the housemates. She gets emotional as she leaves the housemates. Vikas hugs her and tells her that they will meet in a few days.

Bigg Boss then calls all the contestants to the garden area for the midnight (mid-week) elimination. Akash calls everybody out. The contestants are asked to stand in a line in front of their name plates/pictures.

The contestant whose pictures get burnt, are safe. Vikas, Hina and Shilpa are declared safe. Puneesh and Akash are asked to give their farewell speech.

PS: The viewers can vote for their favourite contestants - Shilpa, Vikas, Hina and Puneesh only till Saturday (January 13) night. The voting lines will be closed after 10 am.

In the social media, a video is doing rounds, in which Shilpa is seen telling Puneesh and Luv that Akash will make it to top five. She also adds, "Akash ko midnight ko utake le jayge, yeh tum likh lena." Well, Shilpa's prediction was right.

Shilpa Would Have Been Right Regarding Vikas’ Elimination …

We also guess that she would have been right regarding Vikas' elimination (that he would be out in the 14th or 15th week), if only three of them (Shilpa, Hina and Vikas) were nominated for eviction!

Coming back to the show, in the upcoming episode, to become part of the prize money, Vikas will have to compel everyone to lose in a task! For this, Vikas plays the role of a dictator, and is seen making other contestants, Puneesh, Shilpa and Hina dance to his tunes.

Vikas orders Shilpa to wear a sari. In the promo, she is also seen serving and feeding him food. He orders Puneesh to become ‘ganja (bald)' and asks Hina to follow ‘maun vrat'!

While Shilpa was seen following Vikas' order, Puneesh and Hina refuse to follow his orders! Shilpa and Vikas' promo looked damn funny and we are looking forward to tonight's episode as they definitely look good together! 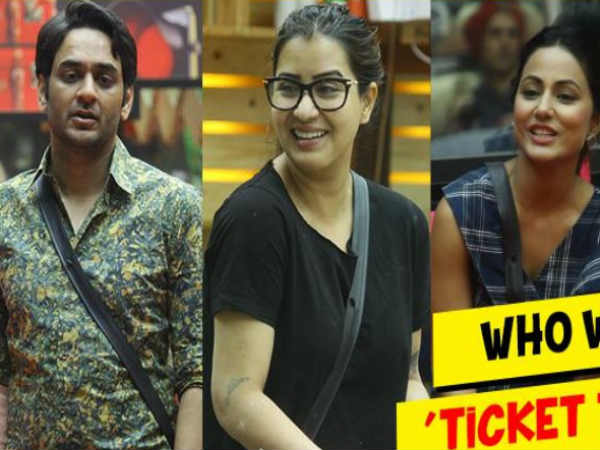