Bigg Boss 12: Karanvir Bohra & Romil Chaudhary out of the race to be winner? FilmiBeat

The stage is all set for Bigg Boss 12 finale. The ex-contestants - Rohit Suchanti, Srishty Rode, Surbhi Rana, Somi Khan and others have arrived at Lonavala. The contestants are also set to give rocking performances on stage. As the viewers are aware, the top 5 contestants who are fighting for the Bigg Boss 12 trophy are Deepak Thakur, Romil Chaudhary, Sreesanth, Dipika Kakar and Karanvir Bohra. One will lift the trophy and another will take the money briefcase. While many speculations are doing the rounds on social media regarding the eliminations and the winner, the makers might bring a twist on the show!

Yes, there might be live voting and the winners might be decided on the spot! So, stay locked to this space! Meanwhile there will be lot of entertainment and promotions on the show. Check out the live updates of the show here!

Salman Khan enters the house and gives introduction to the top 5 contestants with rocking performances. Salman dances with Karanvir to the song 'Jhumme ki raat', with Deepak to the song 'Pade ji seeti'.

# The contestants' family members praise them and want them to win the show. Salman teases Karanvir. He trolls Sreesanth that they counted as to how many times he said that he wants to quit the show which is 299 times.

# Salman asks Dipika when she first cried and Deepak when did he fall in love with Somi. He smells the trophy and teases Romil.

# Salman shows how at Romil's place, people want him to win the show. Salman makes Romil talk to Karnal people. Romil thanks them all.

# The tough boys of the house Romil, Karanvir and Sreesanth are seen performing to the song 'khalibali'.

#Bharti joins Salman on the stage. She teases Salman that he should marry her.

# Bharti challenges Salman for a dance face off. They dance together on Salman's hit songs like 'Jalwa', 'Selfie lele re', 'Jumme Ki Raat' and others.

# Salman announces that Karanvir is eliminated. KV hugs his friends and leave the house. At the stage, Karanvir tells Salman that it is shocking that he got least number of votes. He also adds that Deepak might win the show.

# Salman shows how Deepak's family members and people at his place want him to win. Deepak also talks to his people.

#Deepak sings and dances with Somi.

# Rohit Shetty enters the house and make the contestants sit on a chair tied with wires. He cuts the wire of Sreesanth and Dipika, who are declared safe. Deepak is also announced safe. Romil gets eliminated.

# Romil wants Deepak to win, while he feels that Sreesanth might win the show.

#Bharti makes fun of Jasmine Bhasin, Ridhima Pandit and Aditya Narayan as they get an electric shock.

# Rohit Shetty announces that their show KKK is starting from Jan 5.

# A new show Gathbandan's Marathi munda and Gujrati chokri are introduced by Salman. The lead pair of the show is seen performing. The show will be aired from 15 January.

# Deepak joins Salman, who teases him that he will get only Rs 85K amount after tax and other cut-offs. Deepak tells that with the money, he will get his sister married.

# Salman tells Deepak that he has taken right decision of quitting as he had got least number of votes compared to Dipika and Sreesanth.

It's Sreesanth Vs Dipika

# Finally, it's Dipika Vs Sreesanth in the Grand Finale. The duo will be seen performing to the songs ‘Yeh kaisa ladkha hai' and ‘Aashiyana'.

# Following the tradition of Bigg Boss, Dipika and Sreesanth switch off the lights of Bigg Boss 12 house and enter the stage.

Dipika and Sreesanth join Salman Khan on stage. Salman announces that Dipika has won the trophy. Dipika tells it's beautiful experience. The ex-Bigg Boss contestants and Dipika's family Shoaib and his sister join Dipika on stage. 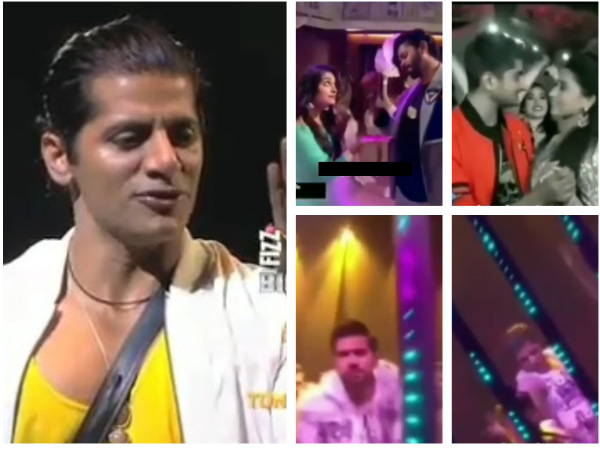