The Creative Director of Balaji Telefilms, Chloe Ferns, is all set to get married to Aslam Qureshi. A few days ago, Naagin 3 actress Surbhi Jyoti shared the wedding card of the couple and wrote, "When you sow love happiness grows. It's so thoughtful, it's so cute @chloeferns @aslamq #lovegrows #aslamcholelovestory #aslamcholekishaadi." As per the invitation, the pre-wedding ceremonies Mehendi and Sangeet will be held on December 15. The cocktail party was held recently and the who's who from the television industry (especially Balaji actors) attended the party.

The cocktail party was themed The Great Gatsby and the actors were dressed in a retro style! Check out the pictures.

Mushtaq shared a picture snapped with Karan Patel and wrote, "It's not possible I party with Karan & not get our mandatory photo! This time over we twinning with florals and smiles!!" - (sic)

Erica shared a few pictures from the party and wrote, "Gatsby night fun night #aslamchloekihaadi When the boys try to pick you up so that we can have an "interesting" picture and we all end up looking like goof balls. Congratulations once again @choleferns." - (sic)

Naagin 3 actress Surbhi Jyoti along with her friends and co-actors, Heli Daruwala and Rakshanda Khan were also spotted at the porty. Surbhi shared a picture taggin both the actresses and wrote, "How much I love these two ladies." - (sic)

Ekta shared a selfie with her gang and wrote, "Thankuuuu everyone for @dressing up all Gatsby (even though I dint) for my party for @Chloejferns @aslamq ! Guys have GOOD JOYOUS married life." - (sic)

Krystle D'souza shared a few pictures from the party and wrote, "Did someone say gatsby ? When your little black dress gets a twist with fringes, you twist as well and show it off." - (sic) 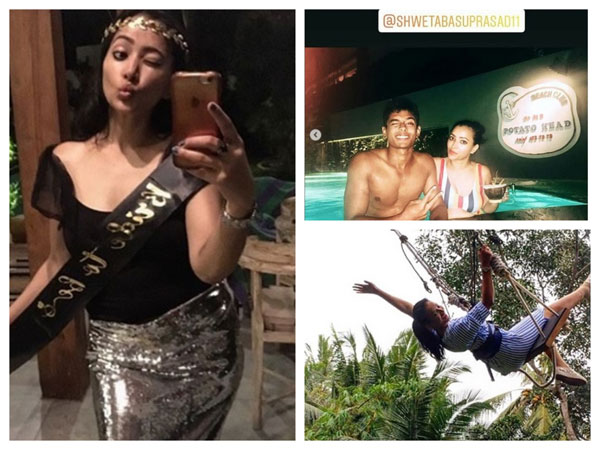 Most Read: Shweta Basu Prasad Had A Blast At Her Bachelorette Party In Bali! (PICS)