It's a dark day for the entertainment industry as veteran actress Sridevi died after suffering a massive cardiac arrest in Dubai on February 24. The actress has made her presence felt not only in Bollywood, but also on small screen.

Long back when television was not a big medium Sridevi dared to experiment. The actress debuted on television with Sahara One's sitcom Malini Iyer, which was produced by her husband and Bollywood producer Boney Kapoor and directed by Satish Kaushik. The show was dubbed in Telugu and aired on Vanitha TV.

On the show, Sridevi was seen as a South Indian Tamil Brahmin girl. The show had popular actor, Mahesh Takur, (who is now seen on Ishqbaaz), playing Sridevi's on-screen husband, Pinku aka Pankaj Sabharwal.

Mahesh: My Deepest Condolences To The Kapoor Family

Mahesh shared a collage that had snapshots of him and Sridevi (from the show Malini Iyer) and wrote, "With sadness in my heart I bid adieu to one of the most graceful ,charming & beautiful co-star of mine. 🙏🌹 working with you in "Malini Iyer" was an honor and those days will always be etched in my memory for ever. R.I.P My deepest condolences to the Kapoor Family #sridevi #ishqbaaz #ishqbaaaz #sahara #sridevikapoor #sridevifans #starplus."

Talking to IE, the actor recalled the days, when he was shooting with the actress. He revealed that initially, he was scared sharing screen space with her. He was quoted by the leading daily as saying, "Who wouldn't be scared of rubbing shoulders with her?"

"And while people would be apprehensive of entering the set when she was around, here was the star approaching you to rehearse the lines. She was a dedicated artist and on camera, she was magical."

‘It Was Sheer Pleasure To Have Worked With Her’

"Since they were also producing the show, Sridevi would be on her toes to check the technicalities and as an actor; she was on her professional best. Not just me, but she made everyone associated with the show at home. It was sheer pleasure to have worked with her."

Mahesh & Sridevi Gelled Up Well During The Shoot

He further added, "At that time there were only two stars - Amitabh Bachchan and Sridevi. She was one of the few female actors, who could carry a film on her shoulder. And here I was getting to romance her. Since we had a lot of romantic scenes, we really gelled up well."

‘She Was As Welcoming As Ever’

"Also with Satish ji at the helm, it was stressful for any actor to be performing there. But, I think the sense of comfort that Sridevi brought with her; it made things really easy. I remember Prabhudeva had been signed to shoot some initial dance scenes and he too was in awe of her. While we were petrified, she was as welcoming as ever."

‘It’s Unbelievable And Yet To Sink In’

The actor says that he is yet to come in terms with her death, "It's unbelievable and yet to sink in. She was just 54, how can she go so soon. Be it her, or even Reema Laggoo's death, it comes as a jolt and just shakes you up."

‘It’s Impossible To Accept That She Is No More’

"I have constantly worked with Sridevi for two years at a stretch, and we extensively shot together and it's impossible to accept that she is no more. I had recently met her at an event and we discussed that we should have tea soon together as it's long we caught up. That day will never come now. I am in a state of shock and loss of words."

He revealed a memorable moments shared with the actress, "We were one of the first shows to shoot abroad. In Canada, where we had put up, Sridevi's daughter Janhvi and my son Aryan used to play together in the play zone in the hotel. My wife is a fan of her and while we were shooting, once Sridevi overheard her fantasizing that she wants Sridevi to wish her on her birthday."

Sridevi Called Mahesh’s Wife To Wish Her On Birthday

"You won't believe, Sridevi ji actually called up on my mobile on her birthday, and asked me to hand over the phone to my wife. She was overjoyed that day. She had no need to do it but you can comprehend how humane she was and thought so much about other people's happiness."

Mahesh revealed that he loved Sridevi in Lamhe. He added, "People talk about how great she was in Chandni but I think she was pure magic in Lamhe." 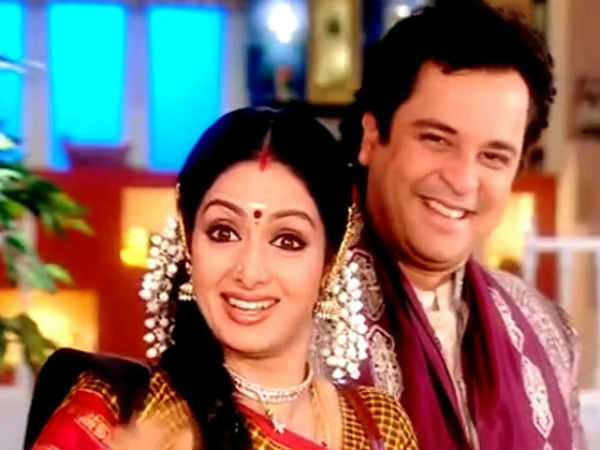 Did You Know? Bollywood Actress Sridevi & Ishqbaaz Actor Mahesh Thakur Had Done A TV Show Together?