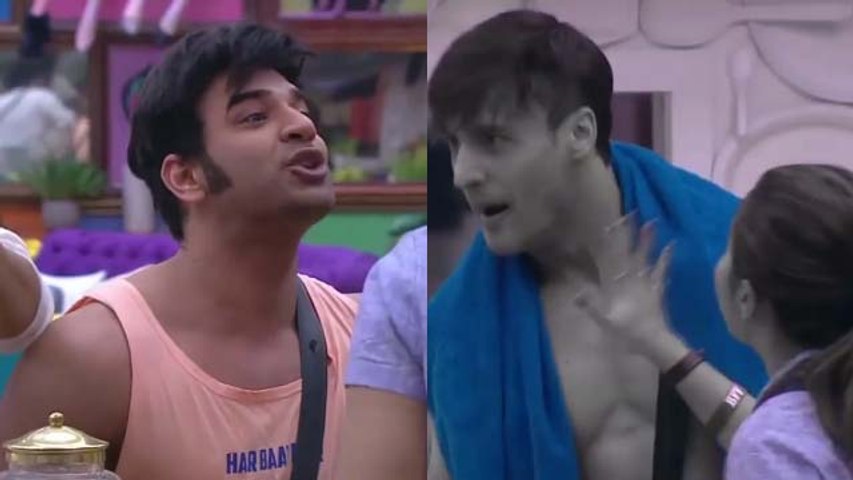 Bigg Boss 13: Paras Chhabra VS Asim Riaz; They both again get into UGLY fight | FilmiBeat

11:35 - Inmates think Shenaaz must support Paras in the ration duty as he is unable to do it single-handedly. The episode ends with a visual of Shehnaaz crying by herself after she gets overwhelmed by participants yelling at her.

11:32 - Koena calls for a discussion on the ration issue and questions Paras on not being responsible enough on his ration duty.

11:20 - Shehnaaz tells Koena that Paras is paying extra attention to her and that he may be flirting with her. She also says that she will not flirt for time-pass, but only if she means it.

11:17 - Paras flirts with Shenaaz and suggests that he can get her calories reduced by kissing.

11:04 - Dalljeet brings up the topic of carefully rationing tea leaves. Asim argues that they have more than enough chai for the whole week. But Paras starts mocking Asim, making Asim lose his temper.

11:00 - Shefali and Paras discuss, and reconcile their differences.

10:58 - Shefali lashes out at Paras for calling her a girl who cries too much.

10:45 - Bigg Boss informs the contestants that in order to secure their place in this 'express' season of the show, girls and boys will have to make connections with each other. Except Siddharth Dey and Asim, the rest of the boys will have to receive hearts from the girls.

10:42 - Shehnaaz Gill confides in Shefali Bagga about sparking a connection with one of the male inmates.

10:38 - Contestants hover around Devoleena Bhattacharjee and watch her cook, which annoys her slightly.

10:33 - Siddharth Dey notices a mess made in the toilet and informs the other inmates, who are equally disgusted. Comments on how even celebrities don't maintain cleanliness are made.

It is day two in the house of Bigg Boss 13, and contestants are already trying their best to forge connections in order to survive the competition. The 'malkin' of the house, Ameesha Patel, made her big entry into the house yesterday like a true 'landlady'. She raised complaints about the cleanliness of the bathroom, entertained the contestants, and got them to do their first task.

Today, we will see a debate over 'chai' turn into a heated argument between Paras Chhabra and Asim Riaz. This will lead to a serious discussion over rationing the items in the house. Stay tuned for live updates!