Ekta Kapoor is on cloud nine, both professionally and personally. The producer has not only achieved success in the television industry, but also on digital platforms and the Bollywood industry. Her film Dream Girl earned Rs 135.25 crore and her TV shows like Kundali Bhagya, Kumkum Bhagya, Kasautii Zindagii Kay 2 are all doing well on the TRP chart. On digital platforms, Kehne Ko Humsafar Hain, The Test Case, Karrle Tu Bhi Mohabbat, Fixer and other web series have also been received well by the audience. To celebrate the occasion, Ekta had hosted a grand party, graced by who's who of the television industry.

Anita Hassanandani, who is currently seen in Nach Baliye with her husband Rohit Reddy and Ekta's show Yeh Hai Mohabbatein, was spotted in a black one-shoulder flared sleeve dress.

Pooja was also seen posing with Karan Singh Grover. It has to be recalled that Pooja got injured on Nach Baliye 9 sets and had to quit the show. She has not been shooting for Kasautii as well. Going by the pictures, looks like the actress had a great time at the party with her co-stars as she met all of them after a long time.

Hina Khan, who played the role of Komolika in Kasautii Zindagii Kay 2, slayed the black outfit. Aamna Sharif, who will be replacing Hina, also graced Ekta's party. She looked stunning in a red dress. 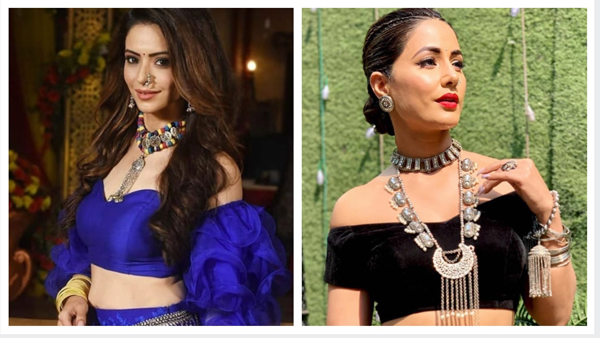