Ssharad Malhotra and Ripci Bhatia's pre-wedding ceremonies - haldi, mehendi, sangeet and engagement ceremonies, which were held on April 19, 2019, were a grand affair. The couple danced their heart out at all the ceremonies. The sangeet ceremony was graced by Ssharad's Kasam Tere Pyar Ki actors Kratika Sengar, Vibha Chibbar and Zuber Khan, Shashank Vyas, Adaa Khan, producer Rashmi Sharma and others. On April 20, Sharad and Ripci tied the knot in Gurudwara as per Sikh ritual.

After Anand Karaj ceremony, the couple had a grand Hindu wedding party for their industry friends. Check out Sharad and Ripci's Hindu wedding pictures and also check out to know who attended the event.

At Hindu wedding, Ssharad looked dapper in a cream and white coloured sherwani along with green coloured neck piece and cream turban. He was seen dancing dancing his heart away at the baraat.

While dhulhe raja arrived with baraat, the bride was seen walking towards the mantap in 'phoolon ki chadar'! Ripci looked beautiful in a red-coloured lehenga with golden design and red chunari.

Harshad Chopda, who impressed the viewers with his role Aditya in Bepannaah, attended Ssharad's wedding. He looked simple in a white shirt and blue jeans.

Zain Imam shared a few pictures and videos from the wedding. He shared a selfie snapped with Nivedita Basu, Shashank Vyas, Eijaz Khan and Harshad Chopda.

While Shashank Vyas rocked in a black suit, Shivin Narang looked dapper in a blue-checkered suit. The duo was seen posing together. 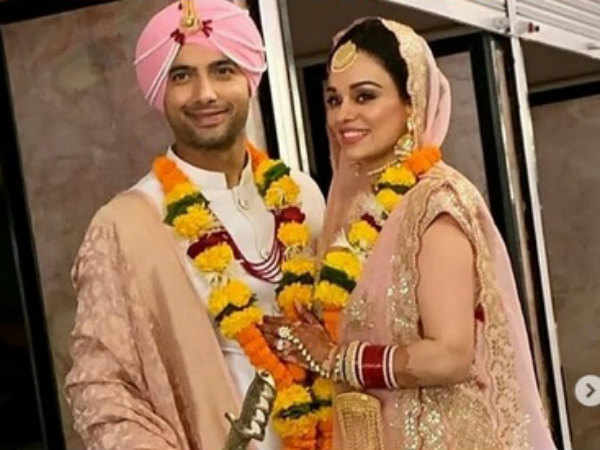