After Anu Malik stepped down as Indian Idol 11 judge, singer Sona Mohapatra had shared an update saying she was approached by the composer via 'Music Director's & Composers Association' and in order to 'strike a deal'. Now, the singer has slammed Sony TV for using the 'theme of sexual harassment' for promotions and commercial gain. In her Facebook post, Sona highlighted the incident where a contestant forcibly kissed judge Neha Kakkar and suggested that the viral clip was used for promotional purposes.

Sona wrote on Facebook, "Sony TV taking Anu Malik as a judge was a planned, considered & devious choice. They wanted to ride on his infamy for publicity, eyeballs & attention. That their marketing strategy included a contestant forcibly kissing a female judge & that clip making it to the show edit & also 'made' viral confirms this intent."

She further wrote, "Using the theme of 'sexual harassment' for promotion & commercial gain is an all time low & in a country where women have very little agency & choice, it is especially disgusting. I'm dead sure people in the Sony TV team have clinked glasses, gotten promotions & laughed at the whole country while taking the audience for a jolly ride."

The singer concluded, "Sickening, inhuman promo strategy, corporate ethics or responsibility etc be damned off course. Evil corporations do exist clearly & not just in books & cinema. @vishaldadlani , still part of this sickness or are you ready to quit? How much money is worth being part of this deathly swamp, I ask." - (sic)

Well, it has to be seen if the makers, the channel or the judges of the reality show react to Sona's post. 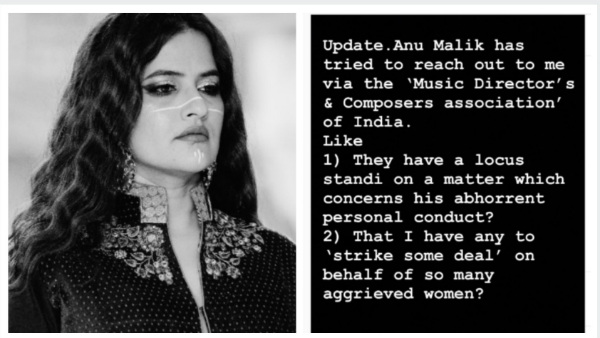 Also Read: Indian Idol 11: Sona Mohapatra Claims Anu Malik Tried To Reach Out To Her To 'Strike Some Deal'