It was double celebrations for the Phogat family! On December 2, 2019, the Phogat family organised a lavish reception party for the newlyweds and Nach Baliye 9 jodi, Babita Phogat and her husband Vivek Suhag. They also made sure to make the night even more special by organising a baby shower for Geeta Phogat. The Khatron Ke Khiladi 8 contestant is expecting her first child with Pawan Kumar Saroha. Take a look at a few pictures from the baby shower!

Geeta Thanks Her Sisters

An elated Geeta shared a few pictures on her Instagram stories. She shared a picture tagging Ritu Phogat, Sangeeta Phogat, Tripti Singh and Minisha Soni, and wrote, "Thank you for all the efforts you put in organising such a wonderful baby shower party for me 😘 ❤️."

It has to be recalled that Geeta and Pawan had announced the news of them expecting their first baby on social media. Geeta had written, "A mother's joy begins when new life is stirring inside... when a tiny heartbeat is heard for the very first time, and a playful kick reminds that liitle one is never alone." You never understand life until it grows inside of you 🤰❤️ #pregnancy #babybump #motherhoodrising." Geeta's Khatron Ke Khiladi co-contestants including Hina Khan, Shibani Dandekar, Lopamudra Raut, Nia Sharma, Shantanu Maheshwari and others had congratulated her. 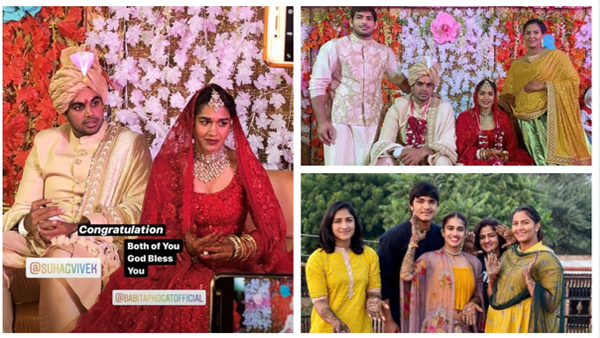