Like any other year, 2019 was full of controversies! While the television celebrities had their share of controversies, shows too grabbed the headlines for different reasons. As we prepare to welcome the year 2020, take a look at the controversies that made headlines and sparked arguments in 2019.

Navjot Singh Sidhu got himself into trouble by making a controversial remark on Pulwama terror attack, in February. His statement didn't go down well with netizens, who slammed and asked The Kapil Sharma Show makers to sack Sidhu. He was later replaced by Archana Puran Singh on the show.

Anu Malik, who has been accused of sexual harassment and misconduct by several singers, including Sona Mohapatra, stepped down as Indian Idol 11 judge after the National Commission for Women sent a notice to Sony TV. The music composer was later replaced by Himesh Reshammiya on the show.

The singing reality show Indian Idol 11's judge Neha Kakkar grabbed the headlines as one of the contestants during audition forcibly kissed her. A few viewers slammed the show and accused the makers of staging the drama for TRPs.

Nach Baliye 9 was considered as the most controversial one because of the 'dramas' that were happening on and off the sets! Post exit, Urvashi Dholakia (who participated with her ex-Anuj Sachdeva had called the dance reality show as a ‘drama competition'. She had claimed that he makers were partial towards a few couples.

Also, the ex-couple Madhurima Tuli and Vishal Aditya Singh's constant fights during rehearsals, on- and off-sets had grabbed headlines.

Indian cricketers Hardik Pandya and KL Rahul's Koffee With Karan episode was the most controversial episodes of Season 6. Hardik's misogynist remarks and Rahul's comments didn't go well with the viewers, who slammed them on social media. The episode was deleted from Hotstar. Post their appearance on the show, they were banned for a couple of matches.

The concept of 'Bed Friend Forever' and a few tasks didn't gone well with a section of the viewers, who slammed the makers and the channel for the same. Netizens trended #BoycottBiggBoss13, #JehadFelataBiggBoss and #UnsubscribeColorsTV on social media. The Confederation of All India Traders (CAIT) had also sent a letter to the Information and Broadcasting Minister Prakash Javadekar, urging him to impose a ban on Bigg Boss 13, on grounds of vulgarity. Karni Sena had demanded a ban on the show alleging Bigg Boss 13 is against Indian culture and suggested that it promotes love jihad. In fact, 20 people were arrested for protesting against the show outside Salman's house.

The show is also hitting the headlines because of the controversies that the contestants like Sidharth Shukla, Rashami Desai, Paras Chhabra and others, who are creating in the house.

Disha Vakani aka Dayaben's return to Taarak Mehta Ka Ooltah Chashmah has been the most-discussed topic since a long time. A few reports even suggested that the actress return was delayed because of her husband Mayur Pandya.

Shweta Tiwari grabbed the headlines after she accused husband Abhinav Kohli of domestic violence, in August this year. Apparently, Shweta filed a case against him for physically abusing her daughter. Abhinav, who was arrested by the Mumbai Police, was later granted bail.

Kaun Banega Crorepati 11 makers and Amitabh Bachchan had upset netizens as in an episode, they referred to 'Chhatrapati Shivaji Maharaj' as 'Shivaji' and 'Mughals' as 'Samrat' in one of the questions. They slammed the makers and trended #Boycott_KBC_SonyTv on Twitter. Post this, Sony TV, the showrunner Siddhartha Basu and Big B apologised over Chhatrapati Shivaji Maharaj title row. 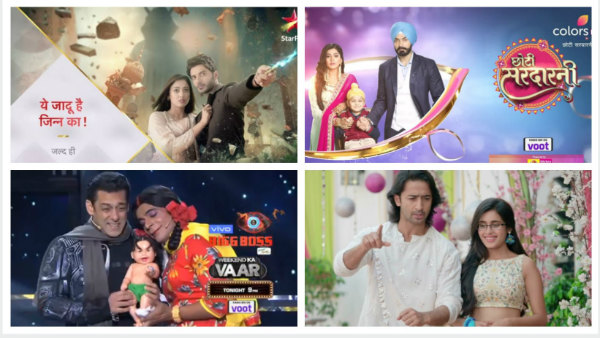