Sony TV's popular show The Kapil Sharma Show has been a huge success - viewers are enjoying the show and it is also one of the top 10 shows on the TRP chart. Another reason for the team to rejoice is that TKSS will be completing 100 episodes. Kapil Sharma's mother graced the sets on this special occasion.

Sumona Chakravarti shared a collage, in which we can see that both the actress and Kapil's mother are having a great time. She captioned the picture, "100th Episodes with the Mommy's...@KapilSharmaK9 ki Maa aur blue wali meri #TheKapilSharmaShow." - (sic)

Team Celebrates The Completion Of 100 Episodes

The entire set was decorated with figurines saying '100'. Kapil, Kiku Sharda and the guest Badshah were seen cutting cakes. Kiku Sharda and Bharat Kukreti shared the video on their Instagram stories.

Also, Dabangg 3 team Salman Khan, Sudeep, Sonakshi Sinha, Arbaaz Khan and Prabhu Deva will be gracing the show. During the episode, Salman revealed something interesting and funny about his sleeping pattern. When Kapil asked Salman how long does he take to fall asleep when he lies down on his bed, the superstar replied that he cannot sleep on the bed and would shift to a couch. Kapil then teases him saying it's because he sleeps alone. Salman also enacted a pose where he was sleeping on the couch, which left everyone in splits.

Krushna Abhishek also makes the superstar laugh with a funny remark on Bharti Singh. Bharti dresses up as Madhuri Dixit (in the trademark violet sari from Hum Aapke Hain Koun!). She enters the stage with a proxy Salman and they enact the flower scene (when Salman hits Madhuri with a flower). Later, Sallu himself recreates the scene with Bharti and everyone enjoys it.

On the show, when Kapil asked how the title of the song came into being, Arbaaz Khan said, "We were looking for an item song for Dabangg 3 like we had ‘Munni Badnam' in Dabangg and ‘Fevicol' in Dabangg 2. We were on a hunt to find an ode for ‘Munni Badnam' to put in Dabangg 3. Salman called me at 1.30 am in the night asking to rush and meet him. He said he got the perfect solution for ‘Munni Badnaam'." (sic)

Arbaaz further said that he initially objected to his idea, saying they can come up with some original rather than curating the older one. But he was convinced when Salman said that they will only use the song if it gets a positive response. Arbaaz further said that the idea was shared with Lalit (composer) and Sajid Wajid (co-producer). Although both songs turned out very beautifully, Sajid's version was finally selected for the movie. 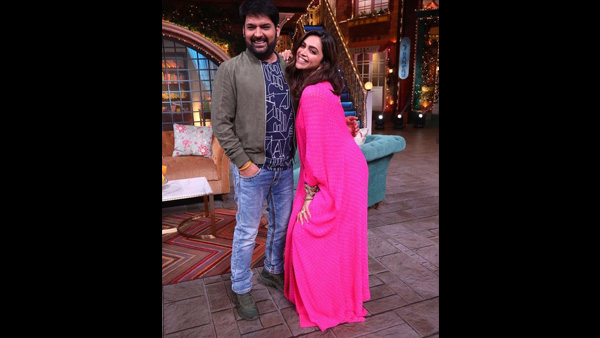