Sony TV's popular show The Kapil Sharma Show has received immense love from the viewers, as a result, it has been one of the top shows on the TRP chart. On December 29, the show will be completing 100 episodes. The team is already in a celebration mode. The cast and crew partied hard in a party organised on the sets. Take a look at a few pictures!

Chandan & Bharti Dance Their Heart Out

Kapil shared a few videos on his Instagram stories. The actor-comedian captured his friends and co-stars Chandan Prabhakar and Bharti Singh having a gala time. The duo was seen dancing their heart out.

Also, Archana Puran Singh, who was enjoying food, started dancing as soon as Kapil called her name. The team was also seen cutting cakes on this special occasion.

The Teams Cut A Cake

Kapil shared a video, in which both TKSS and Good Newwz team were seen having a blast. The actors were also seen cutting a cake on the occasion of completing 100 episodes.

As per the promo, Akshay makes a ‘damakedaar' entry and turned host for the show. When Archana asked if he is hosting the show today, Akshay said that he learnt from her to snatch someone's job (Archana had replaced Navjot Singh Sidhu). Kapil will be seen flirting with Kiara, while Akshay pulled Kapil's leg. Akshay will also seen trolling Kapil.

Akshay was happy to grace TKSS' 100th episode and revealed that it is his mother's favourite show. He was quoted by Mid-day as saying, "I am glad that show has completed its 100 episodes and that I am part of the celebration. I wish this continues forever and ever and keeps spreading happiness and laughter. My mom loves this show and enjoys watching the show."

Archana who has been an important part of this journey shares, "December is the month of celebration for Kapil and for all of us. We have recently welcomed Kapil and Ginni's new born baby and completed 100 episodes of the show. Journey throughout this season has been worth cherishing with tons of good memories to remember."

Krushna said, "Sapna's character has been a game changer for me giving me a totally different identity. Knowing the fact that comedy is one of the toughest genres to crack I am amused looking at the kind of response that Sapna's character has received over the year. However, without The Kapil Sharma Show and Kapil himself this wouldn't have been possible. It was a great journey sharing space with Kapil Sharma and being each other's strength throughout." 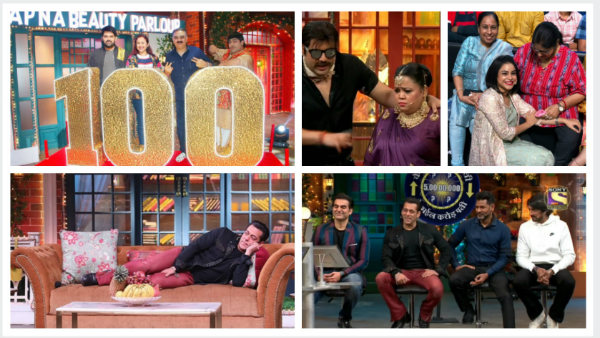