Saumya Tandon became a household name with the role of Anita Bhabi aka Gori Mem in Bhabiji Ghar Par Hain. The actress, who played this role for five long years was loved by the audiences. But she recently quit the show for future prospects. Since then, the makers of the show are hunting for a suitable actress who can replace and fit Saumya's role. Looks like the makers have now found a replacement! According to Spotboye report, Nehha Pendse has been approached to play Anita Bhabi!

A source was quoted by the entertainment portal as saying, "Show's producer Binaifer Kohli is keen to get Nehha Pendse on board to be the new Anita Bhabi. She has been the main lead in her previous show and finds her suitable for the role."

But as per Tellychakkar report, Nehha might not do the show. A source was quoted by the portal as saying, "Bhabiji Ghar Par Hain set is located in Naigaon while Nehha stays in town. It will be extremely difficult for her to travel from her residence to Naigaon sets and hence, she is speculated to not take up the project."

Nehha was last seen in the controversial reality show Bigg Boss 12. She was also seen in a Marathi film June. The actress got married to Shardul Singh Bayas in January this year and is enjoying her personal life. It is being said that she hasn't said yes to the offer till now.

It has to be recalled that earlier there were reports that Bigg Boss 13 contestant Shefali Jariwala might replace Saumya. But Shefali had clarified that she is not replacing Saumya. She had tweeted, "Funny how a rumour can spike up so much confusion. Putting all rumours to rest, I haven't been in touch with anybody from the team of #BhabhijiGharParHain , I am not replacing the beautiful & talented @saumyatandon. Be safe All !." Even Binaifer Kohli had clarified that she had not even spoken to Shefali or anyone about it!

Well, we will have to wait for the official confirmation from the makers or Nehha herself to know if the latest reports are true or not! 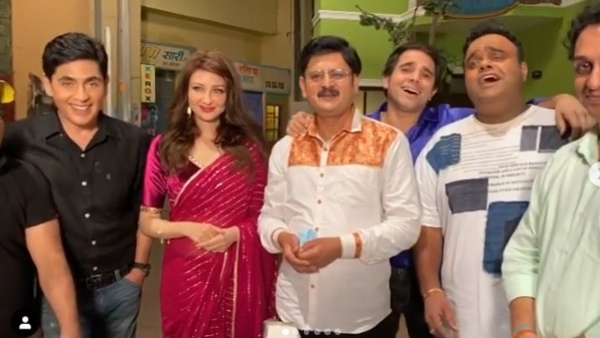