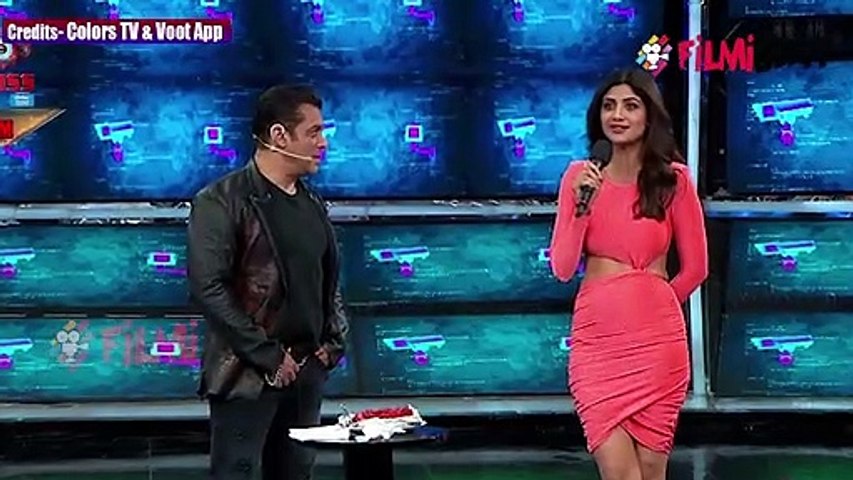 The excitement of the finale has taken over the Bigg Boss house and the contestants are riding high on anticipation. Salman Khan begins the last Weekend Ka Vaar of the season by welcoming his close friend and co-actor Shilpa Shetty Kundra. Shilpa gets a special dessert for her friend and reveals that Salman was the first person to call her after she won Big Brother. Salman, too, praises Shilpa for her fitness and calls her the 'Fitness Queen' of the industry. Along with her fitness, Salman praises her entertainment skills on social media and requests her to perform. Shilpa calls for a television setup

and the two of them perform to 'Tadap Tadap Ke Iss Dil Se' albeit with a twisted ending.

Later, Salman welcomes the Shilpa Shetty's co-actors and the cast of the movie Nikkamma Abhimanyu and Shirley Setia. Shilpa and Shirley reveal that Abhimanyu loves performing to 'Oh Oh Jaane Jaana' whenever he is shirtless for a scene. He then performs with Salman to the song onstage. Next up, it is time for Salman and Shilpa to have a face-off. The two are asked questions about each other by Abhimanyu and Shirley which they have to answer while running on a treadmill. This leads to a lot of fun and quirky moments.

Later, Salman Khan meets the contestants gives them a task where the contestants have to enact situations 50 years ahead from now. Rashami and Sidharth are given a situation wherein Rashami cooks a burnt paratha for Sidharth and he politely asks her to stop cooking. Taking the fun a notch higher, Shehnaz is asked to express her feelings for Gautam Gulati and Kartik Aryan after 50 years.

The famous saying 'Chota Packet Bada Dhamaka' turns out to be true on the Bigg Boss sets as host Salman Khan introduced Bondita aka Aura Bhatnagar the lead of COLORS upcoming show Barrister Babu. Bondita enters on stage and brings a letter for Salman full of questions. Salman is left speechless as the questions are tough ones. Before her exit, Salman calls for a rasgulla and feeds Bondita while wishing her good luck for her show.